As luck would have it, all of my favorite things for fall converged upon this past weekend: Renegade Craft Fair, the German-American Festival in Lincoln Square, and the Wisconsin Sheep & Wool Festival (this was my first time attending, but anything yarn-related falls under the rubric of 'favorite things for fall'). I'm not one for large crowds of people and, as a general rule, I don't leave the house very much on a day-to-day basis now that I work from home. However, these three events (plus my local farmer's market) were enough to tempt me away from the homestead and go out amongst my fellow humans. I'm so glad I did!

On Friday night, Tyler and I hit the German-American Festival and had a few litres of beer. Yes, more than one...probably not the best plan ever, but it sure was fun! Plus, we arrived just as the festival opened, and there was nary a line for tickets, food or beer. That's the way to fly! You'll note that the poles behind Tyler are wrapped in carpeting...apparently people drinking liters of beer have impaled themselves in years past. I'm guessing this is their solution, since the carpet was a bit too high to be considered a cat scratching post.

I was up bright and early on Saturday morning for my trip to the Wisconsin Sheep & Wool Festival with my pal Lauren (mental note: don't drink two litres of beer the night before). I'm so glad we decided to go this year - it was fantastic! There were two barns full of vendors, and I had a hard time holding back. There was a great selection of regionally-produced yarns and fibers, plus some vendors from other parts of the country, too.  We missed the sheep-shearing demonstration, which I heard was really fantastic, but did manage to hit the hall of breeds, see a shetland-judging competition, witness many bleating sheep, and watch one very feisty shetland refuse to walk obediently on a lead. All in all, a fantastic time! You can view all of my photos here on Facebook (don't worry, you don't have to join the site to view my photo album). If money had been no object, there's no telling what I would have brought home...probably an actual sheep! Here is my (modest?) booty: 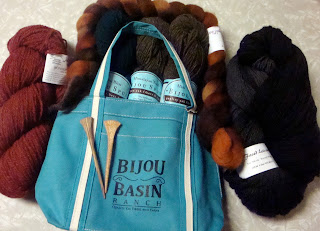 I bought one braid of merino on sale for $6, a couple of hand-whittled wooden shawl pins, and some lovely yarns from Green Mountain Spinnery, Bijou Basin Ranch and Ogle Design.

Tyler and I hit Renegade Craft Fair on Sunday afternoon to browse, drink a few beers, and enjoy the wonderfully fall-ish weather. The fair was a little bigger this year - there was an offshoot of vintage-specific vendors, for instance - and I thought that there was a pretty good mix of vendors, too. For instance, there wasn't an overabundance of items with birds on them, too many zombie-themed whatevers, or (as in the case of last year) a multitude of terrarium vendors that caused me to question how there could be such a high demand for terrariums. There did seem to be more baby and kid-oriented vendors, but I think that's become the wicker park demographic, which would explain the number of people who were attempting to push their strollers through the crowd (I never understood that, isn't it hard enough to walk through the crowd as a single person?!).

I think I was already at my saturation point for crowds and looking at pretty things, but It was great to see many of my poster-making friends as well as my favorite vendors who I count on to attend Renegade in Chicago every year. Here's what I ended up walking home with: 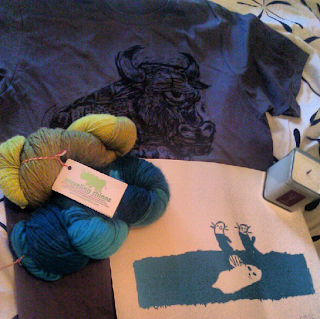 T-Shirt by Dan Grzeca, art print by Dan's daughter Ella, two skeins of yarn from Rhinofluff, and a soy wax candle from Nicolet Candle Company...a pretty great haul!
Posted by Handmade by Stefanie at 7:05 AM