Baby knits are such a great instant-gratification project, and having a stash of cute baby things comes in handy when someone announces that they're expecting. I was excited to try out this project kit from Kraemer Yarns when they were looking for reviews of their new project kit offerings at patternsbykraemer.com. 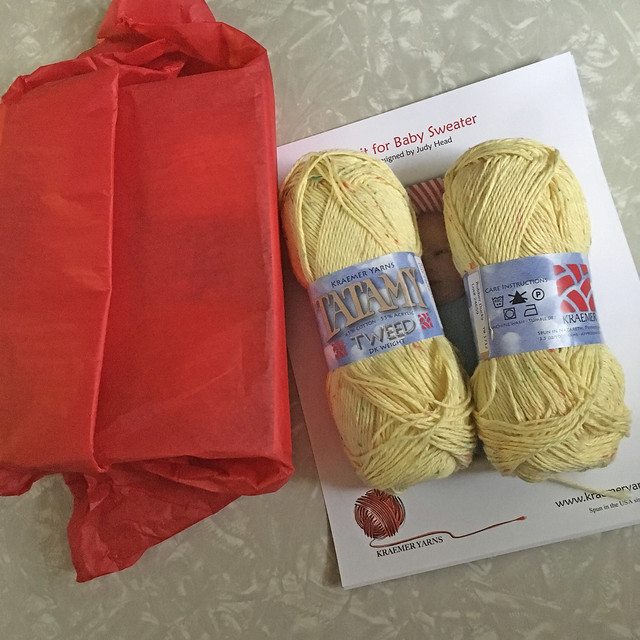 The Knit For Baby Sweater is a t-shaped simple garter stitch garment that is knit flat all in once piece and then seamed. The kit includes a printed pattern on high-quality glossy paper with full color photos, and two skeins of Tatamy DK yarn, a blend of 45% Cotton and 55% Acrylic. I chose a nice gender-neutral color, Rubber Duckie, and they sent me two project kits so that I can give one away to my blog readers - keep reading to find out how you can win this project kit! 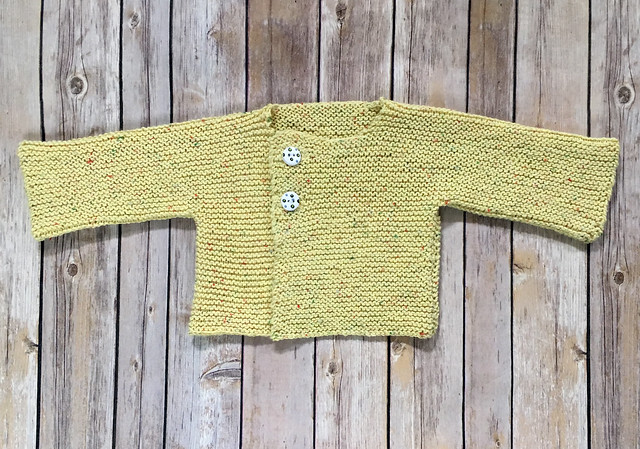 The pattern instructions are easy to follow and keep track of as you work - just count the purl bumps to know how many rows you've worked - and the seaming is quite easy once you're done since there are only two seams to work (each side and sleeve). When I seam garter stitch, I just connect the bumps (or smiles and umbrellas, if you'd rather) - here is a good tutorial to show you how it's done.

I did make one small modification to this sweater to fix a problem I always have when it comes to buttonholes: I single crocheted around each buttonhole with the yarn and a size C crochet hook to fix the loose stitches on each side which would otherwise catch on the button.


As luck would have it, I had the perfect buttons in my stash for the closure - check out these cute handmade buttons from Wildflower Button Studio. I used a little bit of white embroidery floss to sew them on before washing the sweater in some wool wash and laying flat to dry. 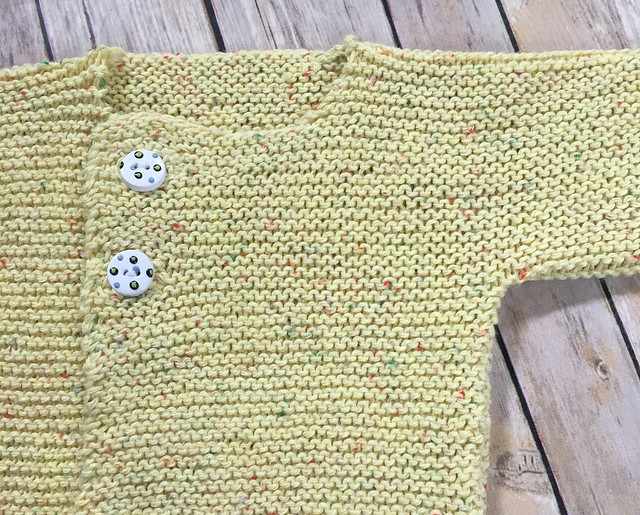 This was my first time knitting with this particular yarn, and I'm pleased to report that it was easy on my hands as I knit - cotton and cotton blend yarns can sometimes be a problem for me. I really like the tweedy effect to add a bit of visual interest to the finished project. Each skein has plenty of yardage, and I have enough left over from the second skein to knit a matching hat (I knit the 3 month size of the sweater).

Kraemer Yarns is a family owned textile mill Nazareth, Pennsylvania. Many of their yarns and spun from wool raised in the US, and they use a range of natural fibers to create their unique blends of yarn (read more about their interesting story here). There is a nice range of knitting and crochet pattern kits available at patternsbykraemer.com, so you're sure to find something to inspire your next project! 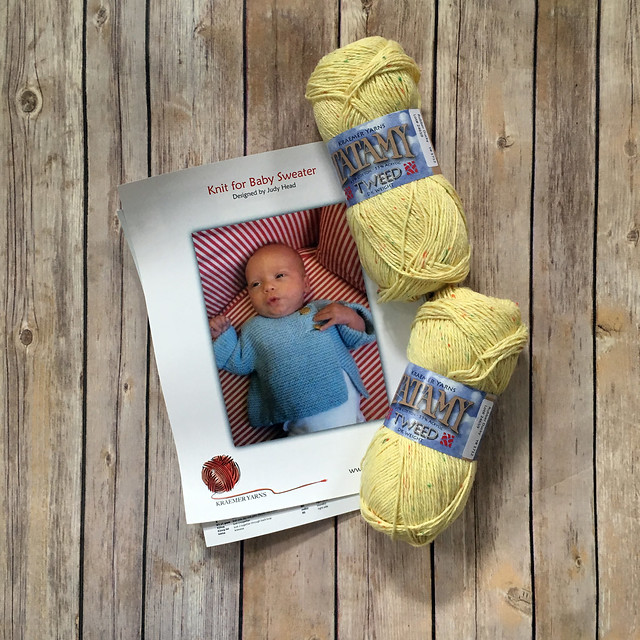 As promised, one lucky blog reader will win a Knit for Baby Sweater Kit of their very own! This contest is open to readers worldwide, you just have to sign up for my newsletter via the link below (or enter your email address so that I can confirm your subscription) to be entered in the drawing, and you will also unlock bonus entries. I'll randomly choose 1 lucky winner to announce next Wednesday, May 2 right here on this blog. Good luck!


Click here to enter for your chance to win a Knit for Baby sweater kit!
Posted by Handmade by Stefanie at 8:00 AM 1 comment:

This article and pattern originally appeared in Holla Knits, an online magazine produced by my good friend Allyson Dykhuizen. She has graciously allowed me to republish here on my blog now that Holla Knits is no more, and I am super excited to relaunch one of my favorite sock designs, the Spring-tastic Socks, which are now available here in my Ravelry store! This pattern is fun to knit and looks great in both semisolid and variegated yarn.

Sock knitting is a pretty vast subject, so this article in no way purports to cover every aspect - but it will help you to tackle your first pair of socks with confidence and give you some ideas for future sock exploration.

First things first: let’s cover the terminology. Below is the basic anatomy of a sock, which you will see referenced throughout most sock knitting patterns.


Cuff: Generally, this consists of some sort of ribbing pattern - most commonly k1, p1 or k2, p1. An elastic cast-on or bindoff is recommended. For cuff-down socks, I like the Long-Tail Cast-On (which actually goes by several names - I’ve heard it also called the Turkish cast on and the German Twist Cast-On); for toe-up socks, I prefer using the sewn bindoff.

Leg: This is the easy part, where you begin working the pattern stitch!

Heel: Traditional sock knitting consists of a flap which is worked flat (usually with a slipped stitch for added durability), then short rows to create what is called the heel turn - that’s just a fancy way of saying you’ll be changing the direction of the knitted piece. After working the heel flap and turn, you will begin working in the round once again by picking up stitches along the flat on both sides as you knit around the socks. Sometimes, this process can change where the beginning of the round falls, so be sure to pay extra attention to the instructions, which may indicate that you need to account for this. Other approaches to heel-making include the short row heel, the afterthought heel, the OMG Heel by Megan Williams, the Sweet Tomato Heel by Cat Bordhi, and the Fish Lips Kiss Heel by Sox Therapist.

Gusset: In this section, you will begin decreasing on either side of the foot. If you are working a sock on 4 DPNs, these are the stitches which are on the first and last DPNs of the round (Needles 1 and 4), which hold the heel turn and picked up stitches. They will usually be knit in stockinette stitch; if you are working on magic loop, these are placed on one half of the needle.

Foot: This indicates the section of the foot where you will be working even in established pattern - that is, stockinette stitch on the bottom of the foot, and the pattern stitch on the top (instep).

Toe: In cuff-down socks, this is where decreases are placed to create a rounded toe and finish the sock; to close the toe securely, grafting with kitchener stitch is recommended. In toe-up socks, this is the start of the whole thing! Judy’s magic cast-on or a knitted tab toe are often how toe-up socks are started; stitches are then increased to work the foot.


Now that you have the vocabulary down, it’s time to talk a little more about the specifics. Socks can be knit toe-up, cuff-down, and even side-to-side on double-pointed needles (DPNs) or on circular needles via magic loop. Lots of folks knit their socks two-at-a-time to avoid what is commonly known as second sock syndrome. They can also be crocheted if you’re so inclined!

Sock knitting is a tradition that dates back hundreds of years, and there are some very creative folks in the industry who are dreaming up new and interesting ways of exploring socks. I encourage you to try out each technique for yourself to see if it works for you!

The great thing about socks is that they are fairly easy to customize, since you can try them on as you knit. Most sock patterns are written for a given circumference (usually ranging from about 7-9 inches for an adult-sized sock), which can be confusing to beginners. In most cases, this circumference can have you covered for both the leg AND the foot, believe it or not! While there are always exceptions to the rule, the circumference of your leg is roughly the same as the circumference of your foot when measured at the arch - and since most socks are designed with negative ease, the differences between these two measurements is negligible except in the most extreme cases - and if it’s not, you can always add or remove gusset stitches to accommodate for the difference!

Besides having an incredibly useful finished product (especially if you live somewhere with a cold winter), there are lots of compelling reasons to give sock knitting a try. Socks are a portable project that’s perfect for the warmer months since you don’t have to worry about having a hot pile of wool on your lap as you work. Plus, they are affordable to make, since you generally only need a skein or two of fingering weight yarn to make a pair. Many knitters claim that sock yarn doesn’t count as stash, so if you are trying to cold sheep this year - you may have just found your loophole! Finally, they make great gifts to give to that stitch-worthy person on your list.

I hope you are inspired to give sock knitting a try. Be sure to check out my other sock patterns here on Ravelry, too! 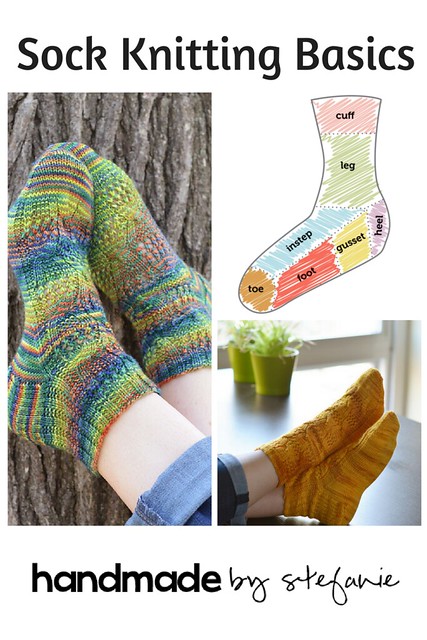 My favorite yarn/fiber event took place here in Chicago last weekend - YarnCon! I went with a friend to shop the marketplace for a few hours on Saturday afternoon and managed to make only 1 purchase: 4 skeins of gorgeous hand-dyed yarn from Black Cat Fibers, which I plan to use for another So Faded Sweater:


I don't think I've ever knit a sweater twice, but I really like how my first one turned out, and it fits me perfectly (especially now that I put a collar on it - no more Flash Dance sweater!). I still have the pattern with the numbers for my size circled, so I doubt it'll be long til I cast on....never mind that I am also currently working on a Comfort Fade cardi in some OOAK hand-dyed colors of Lhasa Wilderness. 2018 is the Year of the Sweater after all, right?! 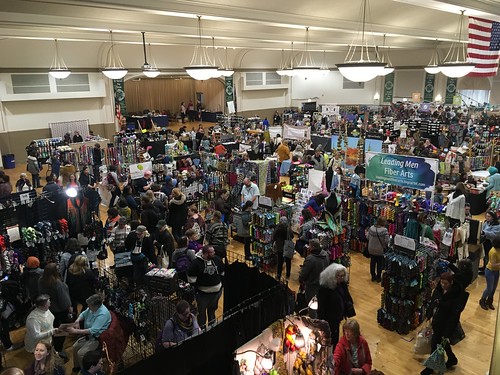 As you can see, the YarnCon marketplace was full of temptation - it took quite a bit of willpower not to bring everything home with me. Thankfully, my recent spring cleaning exercise is still very fresh in my mind, so I was able to avoid a lot of random yarn buying in favor of something project-specific.

Note to self: I should make a list of possible projects I want to make and the yarn I would need for it BEFORE I go to a yarn or fiber festival. For YarnCon, I had no plan, and the only reason I thought to do another So Faded sweater is because I was picking out 3 coordinating skeins of sock yarn, figuring that it would be easy to find a pattern for them after the fact. Then I realized that if I added 1 more skein, that was basically a sweater quantity...and all of the colors were so pretty that I couldn't choose just one, hence another Fade sweater is now in the works!

Randomly: For anyone who is wondering/interested, I am working on some blog posts based on the reader survey from earlier this year (remember that?), and also some new designs for spring! I'm looking forward to sharing all of that with you soon;  most of my free time has been dedicated to my destashing efforts on Ravelry and Etsy, but I do want to shift focus back to the blog this spring. Thanks for hanging with me!