Earlier in the year, I hit a bit of a slump with my weaving - things just weren't turning out the way I imagined, and I found that I was avoiding my loom as a result. This made me think about the things I like to weave, and why I took up weaving in the first place. Some of my favorite projects were simple, plainweave scarves that use up leftover bits of yarn. Light bulb!

After a complete dishtowel fail, I decided it was time to get back to destash weaving (someone on Instagram calls this weaving alchemy, which sounds way cooler). I used a skein of Berroco Vintage that was left over from one of Tyler's sweaters as a warp, and then collected several bits and bobs, mini skeins, samples, and handspun leftovers to create a long piece of fabric to sew into pillows. I tried not to overthink the color sequencing too much, but that's just kind of how I roll. 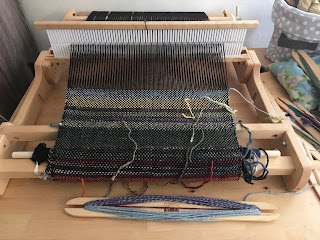 When I reached the end of the warp, I had quite a substantial piece of fabric (naturally I forgot to measure it - doh): 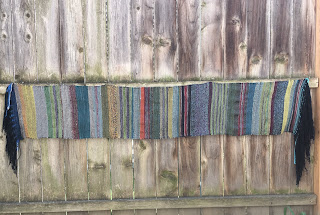 After giving it a nice wash, I broke out the sewing machine and sewed this pillow over the weekend: 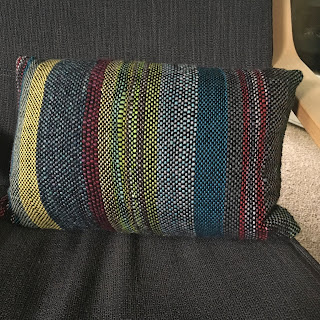 Not that you can tell, but each time I cut into the yardage, I first used a zigzagstitch to secure the woven fabric so that it didn't fall apart before I had time to sew the pillow together: 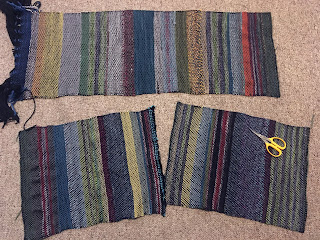 I still have enough yardage left for at least 1-2 more pillows, I just need to buy a few more pillow forms and then find some time to break out the sewing machine once more. I see many more alchemy pillows in my future! 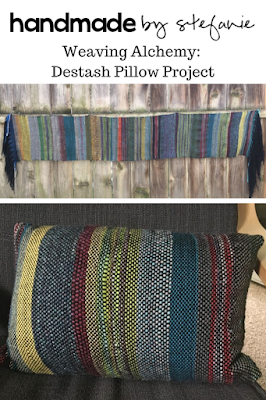 Although my Cheri Chevron shawl has been off the needles since mid-June, it's taken me all this time to finish weaving in the (many) ends and get some photos taken. Yes, I can be a procrastinator when it comes to finishing work!

I needed a refresher on weaving in ends on garter stitch, and found this fabulous video from Staci Perry of Very Pink Knits (she's basically my go-to any time I need  to brush up on a specific technique, because she has a video for everything). Staci makes it super easy - just look for the smiles and umbrellas and you can't go wrong!

You may recall that this is the shawl where I lost at Yarn Chicken....and then had an epic fail in my attempt to order more yarn to finish it. Oops, it happens. Anyway, I don't think it's obvious that I ended up finishing the shawl by using the variegated color the rest of the way - can YOU tell in the photos?!


When it comes to styling shawls, I am kind of a doofus. There's no other way to say it, I just can't seem to get the hang of styling shawls on myself. I don't think I'm the only one with this problem, I'm sure there are plenty of people who enjoy knitting/crochet shawls but then struggle with actually wearing the thing they made. I've tried all manner of shawl pins, and they do actually help, but if I don't happen to have a pin that looks good with the shawl I want to wear, then I'm back at square one.

Enter the shawl cuff - have you spotted this trend on Instagram? That's where I first became aware of this option for shawl styling, and when I was at Stitches Midwest earlier in the month, I bought one from JUL Designs to try out. My first attempt at using it looked a little funny: 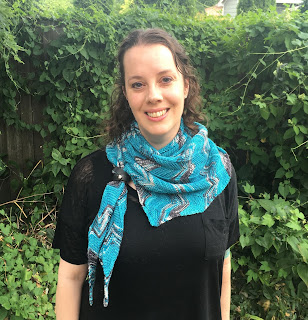 But then I did a search of the #shawlcuff hashtag on Instagram and came up with a better way to use it with this project: 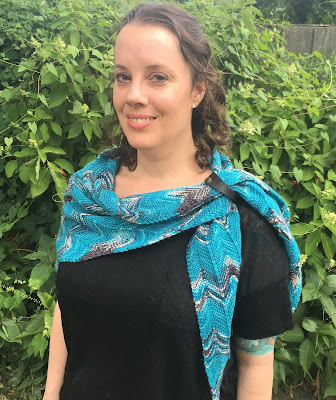 What I like about the shawl cuff that I bought from JUL is that it's very simple - just a good, thick strip of black leather with a snap - and it can also be worn as a bracelet or even a choker, so it's multi-use. Also, you can use it for a wider range of projects because you can wrap it around a smaller shawl multiple times, or use it on a larger shawl with more fabric by wrapping only once or twice. 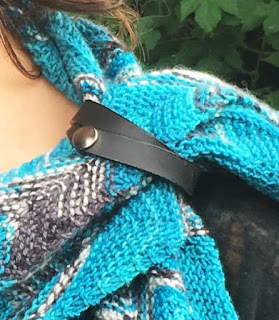 I'll definitely keep working on my shawl styling skills, so if anyone has any tips or resources I should check out, please feel free to leave them in the comments! 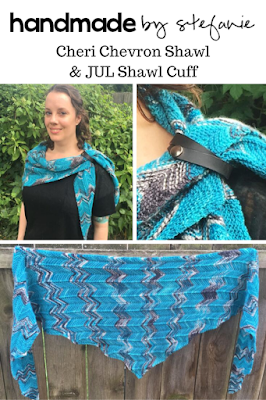 Last weekend, I made the journey out to Schaumburg to spend one day at Stitches Midwest. It's been five years since I last went, and it was interesting to note how much it had and hadn't changed in that time.

Most noticeable to me was the amount of signage stating their policy regarding a safe, inclusive environment for all, no doubt a response to the incident that happened earlier this year at Stitches West. I saw signs on display throughout the venue (not just on the show floor), and there were prominent mentions in the show book and website as well. I really wanted to go to the Diversity Panel with Creative Ceci, Louis Boria of Brooklyn Boy Knits, Michele Costa and Phyllis Bell Miller, but it was during the middle of the day on Friday and I had already committed to working on Saturday afternoon (more on why I can only do 1 day of Stitches in a bit). I'm really glad that they have taken steps to address these issues; I'm sure there is more to be done, but it's at least a step in the right direction.

Other notable changes included the addition of some sewing and quilting vendors, and my favorite part was the display of Prince-inspired quilt projects. They were fantastic! I probably took the most photos at this display than I did anywhere else that day, and I kinda wish I had taken more! 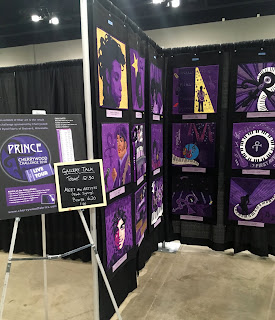 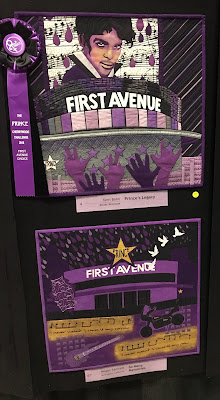 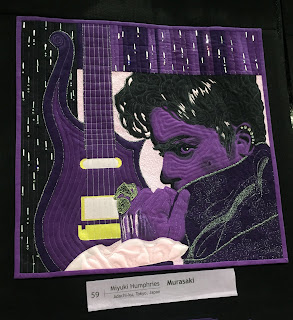 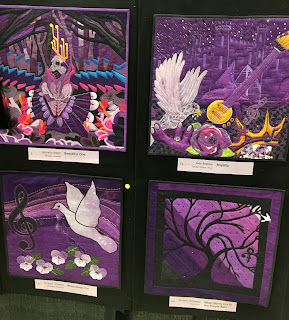 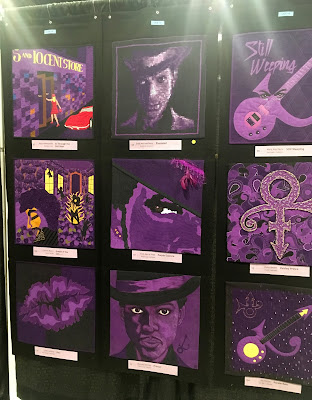 The quality of vendors was much better for this show; in 2014 there were a lot of eyebrow-raising booths (vibrating pillows (?!?!) and what seemed like 20 million aloe cream vendors, for example). This year, the emphasis was on hand-dyed yarns, but there were also some really cool accessories and jewelry. 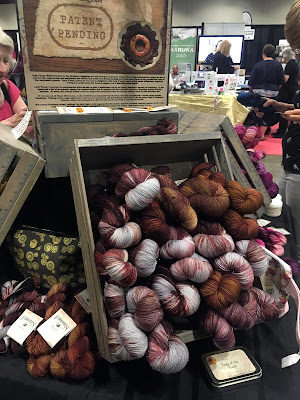 One thing that hasn't changed since 2014 is how sparsely attended it was, at least on the day I was there. You would think that a Saturday would be jam-packed with shoppers in the marketplace, but  that was definitely not the case. I spent four hours working in the Zen Yarn Garden booth and we only sold a handful of skeins and had less than 100 shoppers pass through in that time - not super great, in my opinion. 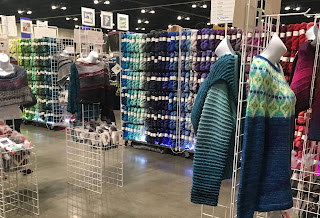 I can only think that the non-transit-friendly location plays a huge part in the attendance, or lack thereof. Sure, there's ample (free) parking for people with cars, and a big 'ol drop-off area for buses from nearby towns or groups, but considering how many crafters live in Chicago proper (and also the fact that most of us don't have cars), you'd think they would want to make it reasonably easy for this substantial demographic to get there. It's not a fun drive, even if you have a car. And if you don't have car access, you're probably not going to make it out there unless you're willing to chance the Metra (which didn't appear to be stopping at the station nearest to the convention center - which was 2 miles away, mind you) or put some of your yarn-buying money towards Uber/Lyft.

At any rate, I went, I squished yarn, and some even came home with me. Will I go again next year? Probably not. But I'm glad I did this year.

So without further ado, here's what I bought at the show:

My first purchase was the yarn and pattern to knit Sempervirens, a layering cardigan to add to my list of "selfish" sweaters to knit this year. It's probably going to jump the queue once I finish the sample I'm knitting on a deadline, and/or the boxy worsted that's been languishing on my needles. 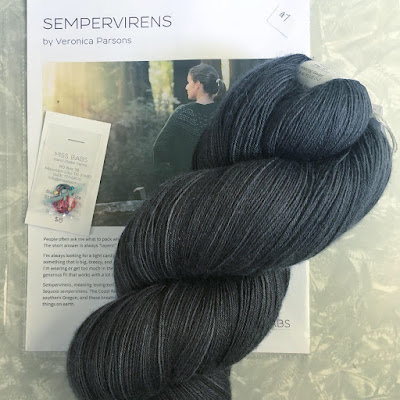 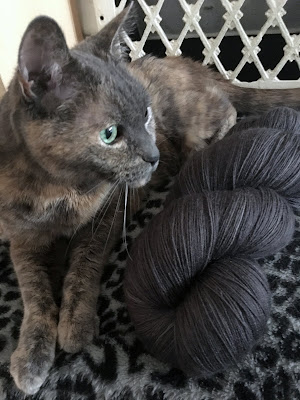 Part of my show-going strategy is to do a walk-through survey of everything, where I make note of things that catch my eye and then go back to those booths later on to spend more time checking things out. One of the booths I was really smitten with was Forbidden Fiber Co., and I think I went back at least 4 or 5 times before I was able to decide on what yarn to buy. They had a lot of really gorgeous colors and bases, including a huge range of Harry Potter-inspired colorways. But in the end, I chose a skein of Babel, a fingering weight blend of Superwash Merino, Nylon and Yak, in the Gemstone Blue color from their Hidden Gemstone Collection. I have no idea what I'll make with it, but I'm sure that I'll figure it out (eventually)!

I also bought a shawl cuff from JUL Designs - this is one of those things I've been seeing everywhere on Instagram, and since I always struggle with styling shawls on myself, I wanted to give it a try. JUL's shawl cuffs are made by hand and can also be worn as a bracelet or choker. 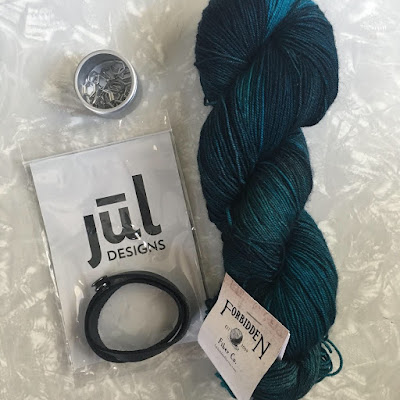 The last bit of yarn to come home with me was from Zen Yarn Garden; I chose a Serenity Silk+ Gradient Yarn Cake and a Gradient Quartet mini skein set. I'm thinking of using them together in a project - perhaps even to knit a sweater, although I'm not 100% sure I have enough yardage. I may spend a little more time looking for project ideas for these yarns (suggestions welcome!). 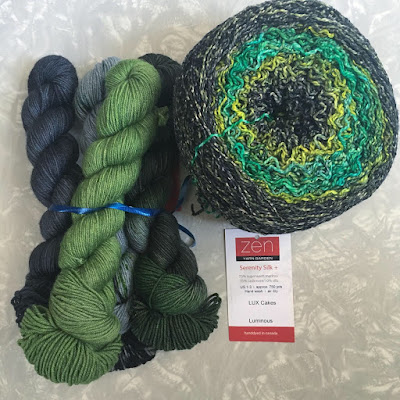 And that's it! I resisted quite a bit of temptation as part of my ongoing effort to stop randomly buying yarn with no immediate plan for it (believe me, if I'd bought all of the yarn that caught my fancy, this blog post would be even longer!). It was nice to see some of my yarn friends at the show as well, and although it was a very long day (on not a lot of sleep, incidentally), I'm glad I made the effort to get out there....if any