Question: What do Elliott Smith, Sock Summit, and my latest pattern have in common?

Have a seat, grab a snack, and I'll tell you!

The Alameda Summer Socks are my newest pattern, hot off the presses.  Don't let the twisted-stitch pattern intimidate you - they knit up quick in sport-weight yarn!

The back story:  I designed these socks to commemorate the three years Tyler and I spent in Portland, OR before we got married and moved to Chicago.  It was there that I got bitten by the knitting bug, and I discovered an exciting world of crafty people and yarn shops filled from floor to ceiling with yarn...up until that point the only place I'd purchased yarn had been Michael's.

My favorite yarn stores were Lint (no longer in business), Mabel's (formerly a yarn store/coffee shop combo, also no longer in business) and The Yarn Garden (still in business, hooray!).  The last year we lived in Portland, we lived a few blocks down the street from The Yarn Garden - you can imagine how dangerous that was!  I have many great memories of hanging out with my best pal Kate, knitting up a storm.  Hard to believe that was before Ravelry existed.  This reminiscing is starting to make me feel old...

Anyway, the name for these socks is taken from an Elliott Smith song - one of our all-time favorite musicians who also spent a good deal of time in Portland, and wrote a lot of songs about places Tyler and I also haunted.  We were living in Portland at the time of his death, and we lived close to one of the memorial vigils that sprang up for him near Ladd's Addition.  We also were fortunate to be be in L.A. shortly thereafter (fun fact - that trip was my first-ever live show in Shalloboi - we played at The Knitting Factory in Hollywood), and we had some time to drive to Silverlake to visit the wall that was featured on the Figure 8 cover and in the "Son of Sam" video - it had also been transported into a makeshift memorial.

Before I digress entirely, let me get back to the point - these are the socks that I wish I'd thought to make for our wedding day.  If you can imagine it (I can't!),  I wasn't really into knitting socks at the time....that came later, when I discovered Nancy Bush's Knitting on the Road

.  Due to financial difficulties from earlier this year, I'm unable to make it to Sock Summit, which is a huge bummer - but I've got my sights set on SS2013 - Portland, I'll be back!!

So to honor my formative knitting years spent in Portland and in the Spirit of Sock Summit 2011,  I humbly present the Alameda Summer Socks Pattern - enjoy!

Postscript:
I found a pretty decent video of Elliott performing "Alameda" live at the Reading Festival in 1998 with Janet Weiss and Sam Coomes of Quasi as his backing band - you should also check out this video from 1997 - he doesn't finish the song, but it's a classic Elliott Smith moment, and a perfect example of what I love and miss about him and his music.
Posted by Handmade by Stefanie at 8:27 AM 1 comment:

This week's crop of FO's is brought to you by my new favorite color (apparently):  highlighter orange.  I'm not sure when this happened - I've never been much of an 'orange' person...but suddenly my living room has some new coordinating denizens as undeniable proof that I'm crazy for orange.  I'm just as surprised as you are! 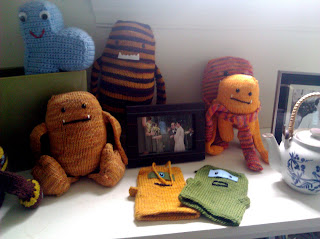 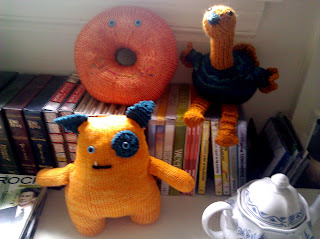 You may notice Rebecca Danger's Dot the Dress-Up Box Monster hanging out with her new friends - I cast on for her last week to distract me from knitting and other work that needs to be done.  Perhaps I should rename her Dot the Distraction Monster!  I wanted to use up the lovely skein of Scarlet Fleece Painted Merino (in Mr. Tangerine Man) that I had left over from making Ursula and Uma....so I got out the Big Book of Monsters

and started knitting away! 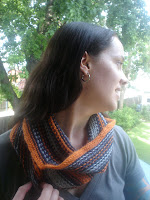 I ended up using some leftover Malabrigo Twist (in Teal Feather) for her ears and eye spot.  Since I only had a tiny bit left, I ended up knitting her ears flat, casting on half the number of stitches called for in the pattern, and then doing the decrease rows in more or less  the same way.  I think I like the flat garter ears a little better, actually - it's a fun variation, at any rate.

Next up for FO Friday is my crazy-colored Honey Cowl - I know, I know - didn't I just make one last fall?  Yes, it's true - but I managed to lose itjust before the end of winter - curiously, in the same part of town were I lost a foliage hat a few years prior.  Chicagoans, beware of Lincoln Square - it's apparently a knitwear-eating vortex! 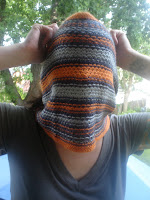 No matter, I decided to make a better version using some sample skeins of Lorna's Laces Honor that I custom-dyed while I was still working there.  I think the light grey-blue color (or a version of it) became a Real Color (Fjord?) there  - but I don't think the orange or dark purple-blue (which I dubbed 'Inky') ever made it to Real Color status (Inky was kind of a pain to mix up, so can I understand why!).

I'm loving the way it turned out - so soft and silky!  If only it wasn't 90 degrees out!
Posted by Handmade by Stefanie at 12:50 PM No comments:

If yarn is the drug, then I want to O.D.

Exciting news in the world of hand-dyed yarn:  The Wool Dispensary is open for business!  Yes, their web store is open and there's a yarn to cure whatever's ailing you.  These are extremely rare, limited-edition, possibly-not-to-be-repeated skeins, folks.  I'm not trying to tell you how to live your life, but I wouldn't wait too long before snapping these up!  I'm currently knitting with Useful Restorative, a 100% superwash merino sport weight yarn, and I can tell you - it's divine.

So the full disclosure/background on all this Wool Dispensary stuff?  Two of my knitting pals are teaming up to take the hand-dyed yarn world by storm.  Bree Miller is an obsessed knitter, a talented designer (we were in Malabrigo Book 3 together!), and a marketing manager by trade.  Sam Boice and I used to work together in the yarn mines, and I don't think I've ever met a knitter who is so obsessed with yarn and knitting...she's incredibly prolific!  Seriously, this lady can knit sweaters around me.  She got me hooked on Rebecca Danger patterns and has enabled too many unnecessary yarn purchases to recount in a single blog entry.

In summation, they're good people making kick-ass yarn.  They're closing in on their fundraising goal on kickstarter, too - if you haven't had a chance to pledge, now's the perfect time!

P.S.  Before you think I'm too clever, I stole the title of this blog entry from the B.J.M.
Posted by Handmade by Stefanie at 8:36 AM 2 comments:

Email ThisBlogThis!Share to TwitterShare to FacebookShare to Pinterest
Labels: pos-mens, the wool dispensary

I'll try not to be mushy, but it just so happens that today is our six-year wedding anniversary (side note: we've been together for 11 years total!  I can't believe it either!).  How does one find the perfect gift that conveys exactly how you feel?  It can be a tricky business.  This is probably the part where I say something super cheesy about making him something from the heart - and I do tend to knit lots of gifts for Tyler, and they are from the heart, it's just that....we're not terribly traditional people (I did insist on having the wedding march played on kazoo in our backyard, poolside wedding).  Our collective idea of a 'gift from the heart' is usually a record (him) or a knitted creature (me).  If we overspend, it's because there were too many covetable records at Reckless (that could be either of us!), or someone (not me) wanted to get a gift certificate to Nina so I could get a sweater's worth of yarn.  No expensive jewelry, swanky dinners, or elaborate gifting here.
Have I set the stage enough?  Alright then...as it turns out, I ended up doing something a little more traditional this year....quite by accident. 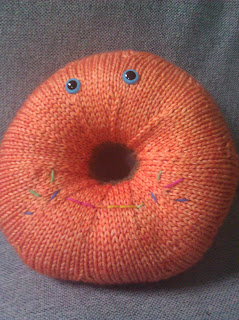 Apparently, the 'traditional' six-year anniversary gift is candy or iron (which really makes me question this whole 'traditional gift thing' - who thinks of these things?  candy?  iron?  simpler times, I guess...).  Curiously, the 'modern' gift is wood.  Go figure.  (Yet another side note - thinking I'll have to go trad for next year yet again - the seven-year gift is WOOL.  Tyler, are you reading this??  Wool! Please don't be buying me a desk set...)

So, in the end, I made him his very own anthropomorphized donut.  It's practical (duh!), it's personal (Tyler loves donuts!)....it's traditional.
Posted by Handmade by Stefanie at 9:26 AM No comments:

You wouldn't think that a trouble-making bear such as Mr. Nubbins - without opposable thumbs, at that! - would be much help in the kitchen, but on the Fourth of July, he pitched in and helped make the cupcakes.  Apparently he knows a thing or two about baking - who would have guessed??

FO Friday - of Monsters and Monkeys 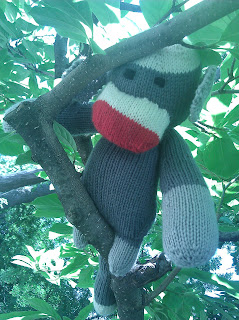 It's rare when I actually have (and remember to blog about) FO's for FO Friday, but I finished this funny little baby monkey this morning and just had to share!

Tyler likes him because his nubby little legs and disproportionately long tail act as a kickstand, allowing him to stand up on his own!

I also want to share my friend's first-ever Monster FO.  While Julie was visiting Chicago last weekend, she decided to revisit knitting and wanted to make a monster.  I set her up with some yarn, needles, and a Rebecca Danger pattern.  It was pretty hot out the entire holiday weekend, so there was ample time to sit in the air conditioning and knit.  I was really impressed that she had a completed monster to take home with her!  Further proof that knitting really is like riding a bike...but it's infinitely more addictive - we ended up making a journey to Loopy Yarns on the Fourth.  Good thing they were open, because Julie really wanted to stock up on monster yarn before heading home!
Posted by Handmade by Stefanie at 4:38 PM No comments:

It's been a while since I've posted any WIPs (or FO's, for that matter!)  I assure you, I have been knitting - there is no need to fear for my well-being.  I just happen to be knitting a lot of top-secret projects at the moment.

For example, I'm working on my first xmas project - yes, yes, I start my holiday knitting in June.  It's true!  I'm also finishing up a new summery sock pattern to be released later this month - I keep meaning to post teaser photos here, but so many other blogworthy items keep giving them the bump (you can, however, view a teaser photo in my Ravelry group!).

I've made a little progress on Tyler's sweater, but I can't say that it would be a terribly interesting photo to post - it's a big, black, stockinette-stitch, v-neck sweater.  'Nuff said.

I have, however, been knitting a LOT of toys - it is the Summer of Toys, after all!  So what have I been making?

I guess you can say I've been busy!  So what's on your needles right now??
Posted by Handmade by Stefanie at 8:10 AM 1 comment: