Not too long ago, I was sent a lovely box of yarns from Antonio and Molly Manzanares of Shepherd's Lamb, a family-owned and -operated ranch in New Mexico. They raise a flock of Rambouillet and Navajo-Churro sheep to make organic their organic yarns which are processed and spun in the USA, then hand-dyed with low impact or natural dyes on site. 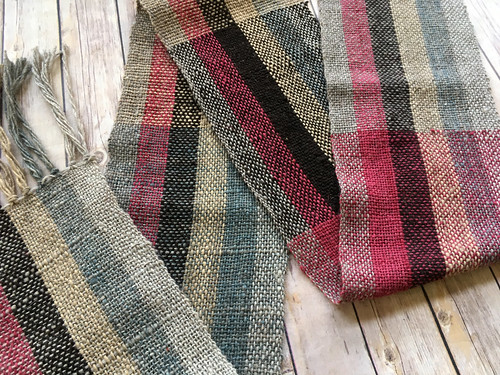 I've never worked with Navajo-Churro before, so I gravitated towards these 6 colors and decided to do a gamp-style woven scarf (for any curious non-weavers out there, here is a great definition of a gamp). 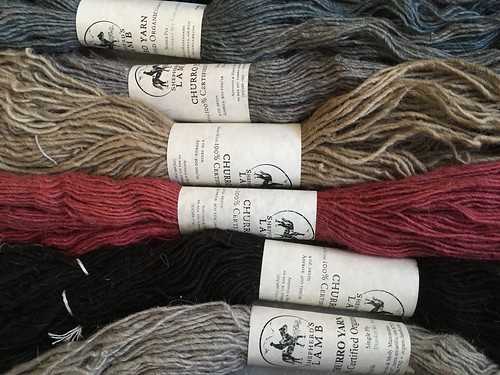 The mix of natural/undyed yarns and naturally dyed colors was really fun to work with, and I have enough yarn left over to each one which I can use in future projects. Now that i know how each color interacts with one another, that will make choosing colors a lot easier (click here to see what colors of Navajo-Churro yarn they currently have available). 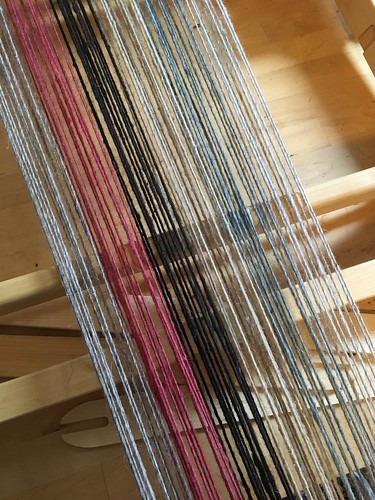 I'm guessing that many of my readers have not worked with Navajo-Churro yarn or fiber before, or perhaps never even heard of it. While it's the oldest breed of sheep in North America, Navajo-Churro yarn and fiber isn't something you come across every day (unless you live in the southwest, I'd wager). In fact, this breed was nearly wiped out in the late 1800s and early 1900s by the US government in several attempts to control the Navajo tribe. That chapter of their history is quite sad, but the good news is that, against all of those odds, the Navajo-Churro bloodline has come back from the brink of extinction and these yarns and fibers are still used today by the Navajo people to create their traditional rugs and tapestries.

Navajo-Churro sheep grow a double-coated fleece, so there can be a lot of variation within the fibers, and some Churro I've encountered in the past has been quite coarse (mind you, that hasn't been much!). This yarn was much softer than I was expecting, though anyone who is sensitive to wool may experience a bit of the "prickle factor" when worn close to the skin. Navajo-Churro is known for being lustrous and hard-wearing, as well as incredibly insulating - I have a feeling this scarf will be an excellent choice for a blustery day when I need to double up on all of my winter woolens. 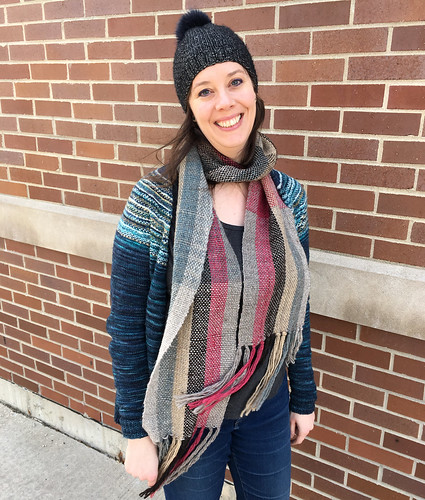 If you've ever wondered what it's like to manage a flock or sheep and manage a working ranch, this short documentary is a fascinating behind-the-scenes peek at the good work Antonio and Molly do:

Has anyone noticed this little badge in the top right corner of your Ravelry notebook? 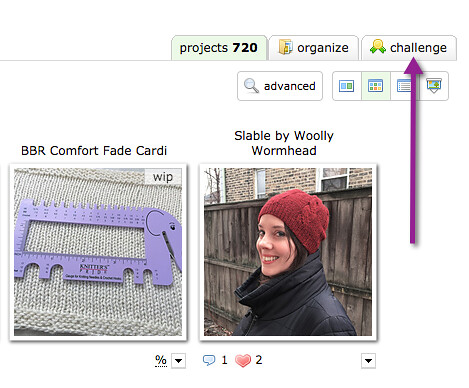 From what I can gather, this is an informal, self-guided challenge to make a specific number of projects within the calendar year. There doesn't appear to be any official Ravelry group or thread associated with accountability or sharing progress, though I've noticed some groups dedicated to destashing or other KALs have picked up on it and are using the feature in conjunction with their event. There is also a discussion thread here in For The Love of Ravelry where people can ask questions about how everything works. 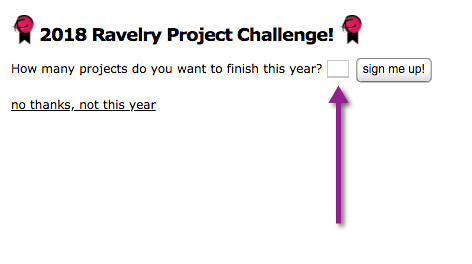 I've never really thought about how many projects I want to make in a year, so I set an arbitrary goal of 50 - I honestly have no idea if that is a reasonable or unreasonable goal, but it does look like you can adjust it at any point if you wish, and any project that has a finish date in 2018 (even if it was started in 2017) counts toward your goal. 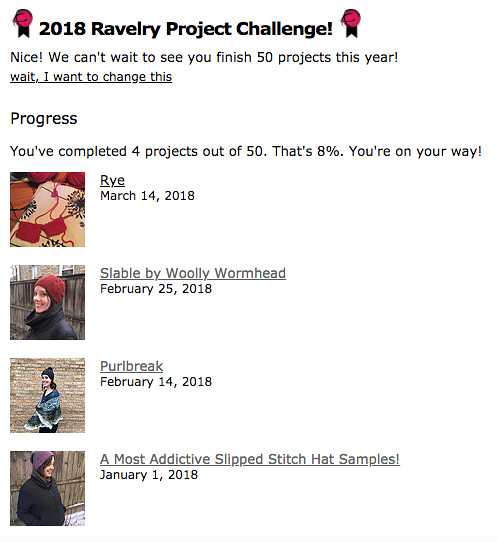 What's fun is that you can also earmark queued projects for this challenge by setting a due date for any time in 2018: 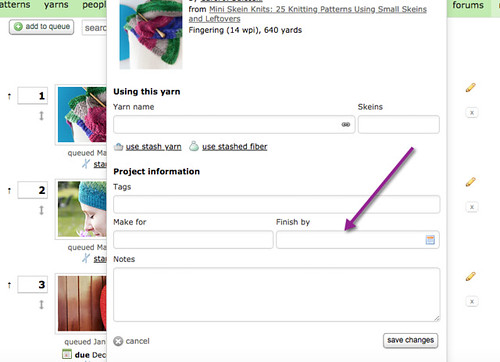 I have been working on paring down my queue to things I think I might actually make (you know, someday) and have started adding in some arbitrary due dates so that I can focus my efforts for this year. Here's what projects I already have the yarn for and have designated for this challenge so far: 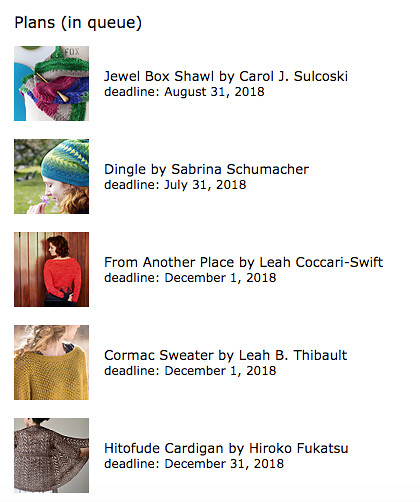 Will you be setting a goal for finished projects in 2018?
Posted by Handmade by Stefanie at 8:00 AM 2 comments:

Most of us joke that there's no such thing as too much yarn, but on the other side of that coin is Stash Acquisition Beyond Life Expectancy (SABLE). It might be early for me, but I already have fears of SABLE, and to be perfectly honest, it makes me sad to look at so many beautiful skeins of yarn going unused, trapped in a storage bin. Perhaps I shouldn't have purchased the clear variety, or stacked them in my office so that I have a near-constant guilt trip as I work, but nevertheless, my stash is starting to bum me out.

Don't get me wrong - I've stashdived plenty for projects in recent years (Find your Fade and So Faded, I'm looking at you especially). The problem is that those efforts are a mere drop in the bucket. Yarn keeps showing up on my doorstep to distract me from my best intentions.

Now, let's add in one more factor: I'm a handspinner, and I spin yarn faster than I knit/crochet/weave with it. That is an unfortunate but undeniable fact.

So, on the average day, I feel as though I might die underneath a mountain of yarn. That may sound glorious or even romantic, but I assure you that the reality is far from it. I carry guilt for all of this yarn that hasn't realized its full potential because I simply don't have enough hours in the day (plus I'm very easily distracted).

This post on the Interweave blog pretty much encompasses my fiber-related existential crisis. Though I spent quite a bit of time in the "depression" stage, I think I have finally moved into acceptance, and with that, I have begun the slow process of rehoming these skeins of yarn which - quite honestly - deserve better than being stored in an airtight bin for eternity (click here to see all of the yarns which are patiently waiting for their forever homes. I'd love nothing more than to send a few skeins your way.)

Yarn isn't my only weakness, however. I have an insane amount of knitting needles, crochet hooks, and project bags as well - probably more than any singular human should own. And until fairly recently, my knitting needles were a horrifically disorganized mess. This adorable sheep bin became a dumping ground for everything I'd used in a project and was too lazy to put back in its proper place:

I should have take the "before" photo of the mess of needles, hooks, and interchangeable cords and tips, because it was a doozy. I'm not sure if I was too embarrassed or if I just forgot, but it conveniently slipped my mind before embarking on The Great Needle Reorganization of 2018. The good news is that I had plenty of cases to corral the mess, but there were two instances where I was at a loss for how to restore order: first, with my collection of DPNs, and second, with the variety of interchangeable cords that I've amassed.

The first challenge ended up being an easy fix - I treated myself to a Della Q DPN Roll-Up, and now all of my DPNs have a lovely little place to call home:

The cord situation is still unresolved, however. For now, they remain a mess of spaghetti in the storage bin, although they're at least confined to just one corner. I'm really not sure how to restore order with them - does anyone have any clever solutions for this problem?

Needless to say, I'll be looking for ways to use up the stash that remains and have started by collecting possible knit and crochet patterns for mini skeins and leftover yarn here on Pinterest. If you liked this post, I'd love it if you pin the graphic below on Pinterest! 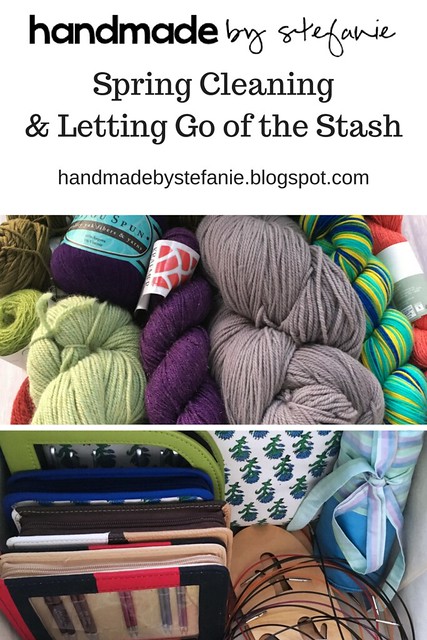 Posted by Handmade by Stefanie at 8:00 AM 4 comments:

Off the Needles: Slable Hat in Smitten

A few months ago when I was visiting one of my LYSes (Firefly Fiber Arts), I couldn't resist picking up a skein of Smitten from Why Knot Fibers. The rich red of the Red Spire totally drew me in, and once I felt the lovely squish of Finn wool and Alpaca fibers, I knew it would be coming home with me! 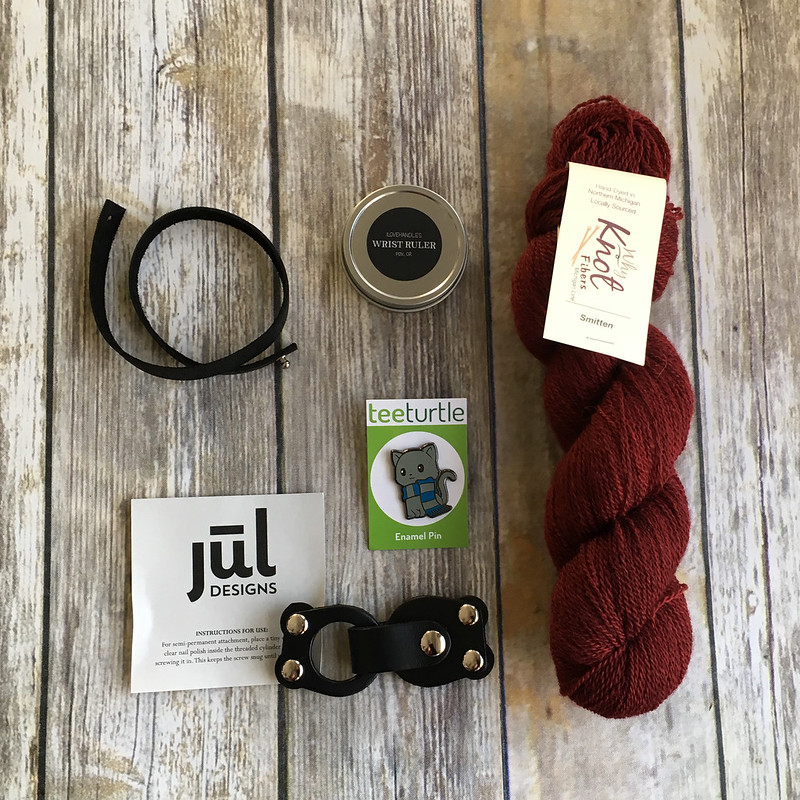 This skein of yarn has a pretty interesting story, too: the fibers were all raised, processed and dyed in Michigan. I'm guessing most of you are well-versed in the ways of alpaca fibers, but perhaps Finn fiber is new to you. Finnsheep (or Finn for short) are an ancient breed from Scandinavia, known for their soft & durable fleece that also feels a bit silky. These qualities really shine through in the yarn - Smitten is 70% Finn & 30% Alpaca - and since alpaca fiber is fairly similar, it's a great matchup overall.

Sometimes, choosing a pattern for such a special skein of yarn can be tough. I struggled with indecision for a bit, but then a friend of mine was wearing a lovely red Slable Hat (pattern by Woolly Wormhead) when she stopped by my house one afternoon. Not only had that pattern been in my queue for a while, I'd already purchased it and holy cow it was perfect for this yarn! I'd been planning to use a different skein of yarn from my stash but never cast on because it just looked too fussy and complicated. My friend assured me that was not the case, and I'm glad I listened to her. 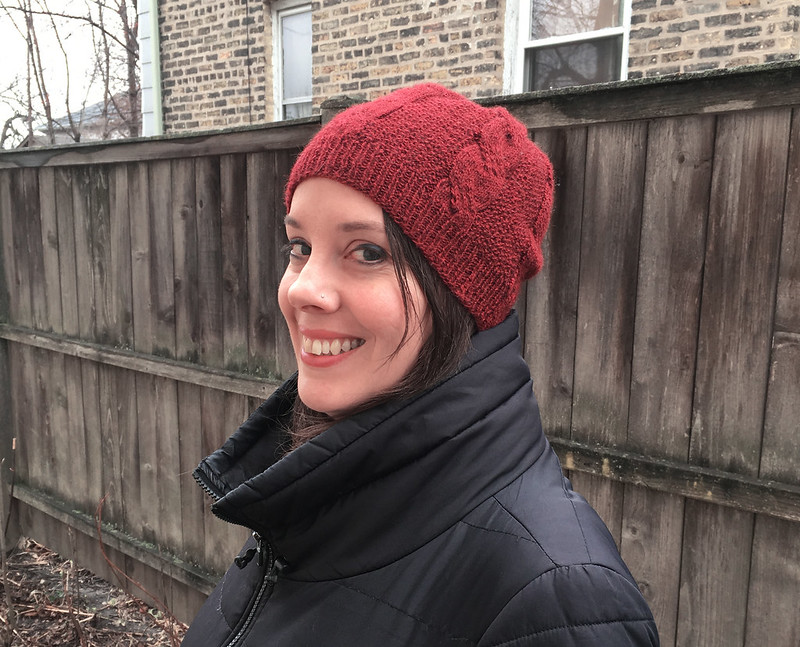 The key for me was to place stitch markers in between each repeat of the pattern across the round - that way, if I got lost, I discovered it before getting to the end of the round and having to rip alllll the way back. The seed stitch was really easy to keep track of, so I was able to just follow the charted cable pattern (the seed stitch sections are only given in the written instructions, FYI). At first, I had a notion that I would add in a pattern repeat to make a slouchier version, but once I tried on the hat at the point where I would either start the crown decreases or continue on for another repeat, I decided that it was the perfect amount of slouch for me.

And let's take a moment to admire the stitch definition for both the textured panels and cables: 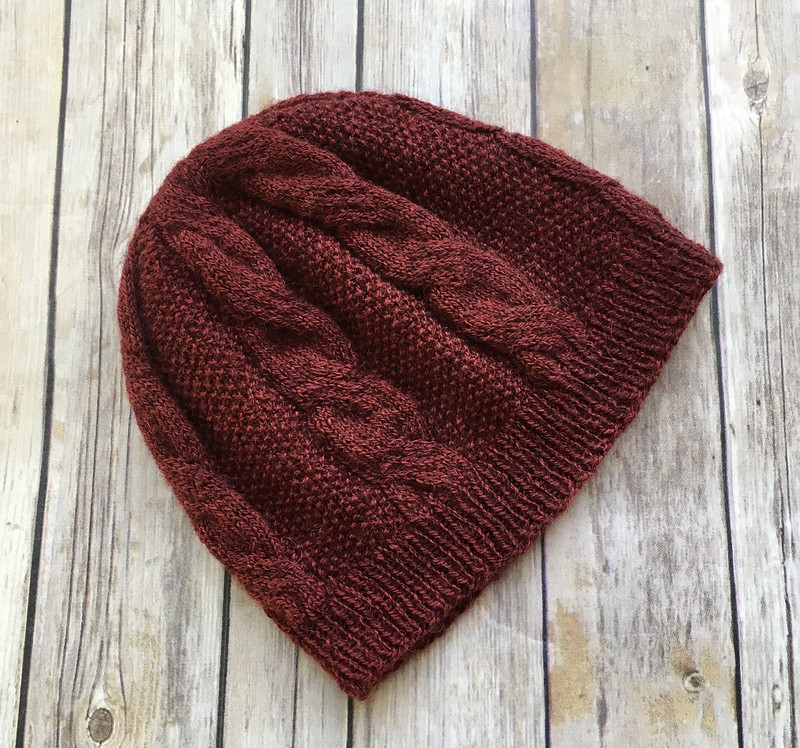 I'm really pleased with how this hat turned out, it's going to be my new lightweight everyday hat to conceal bad hair days (shhh don't tell!) and keep me warm indoors. I'm excited to try more yarns from Why Knot Fibers, too - I've always admired their yarns since discovering them at YarnCon a few years ago, and it looks like they'll be there again this year. I can't wait!
Posted by Handmade by Stefanie at 8:00 AM 1 comment: