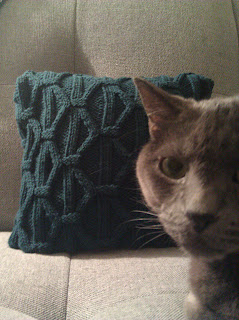 Things are happening!  Yes they are!  It's been yet another whirlwind week - trips to the vet, a yarn party, a late night out last night seeing the Dum Dum Girls @ the Empty Bottle - and somehow, between all that and working two jobs, I've managed to get a few projects off the needles and start just as many to replace them.  It's all about priorities, right?!

I need to block this finished piece, but I'm just so thrilled with how it turned out, I want to share it!   Robin, of course, wanted in on the action - since the couch is his new favorite hangout, I guess he was equally excited to have something new and soft to snuggle up to.

I can't think of a time in recent OR ancient history that I've made a project using the exact yarn and color combination specified in a pattern.  This might be an historic first for me, but it was a total fluke.  Tyler bought me these three lovely skeins of yarn, and as soon as our couch arrived, I knew they would have to become some squishy pillows.

I made very few modifications to this easy cabled pattern, and only because Michael's was out of the 14"x14" pillow forms when I was there the other day.  In order to fit a 12"x12" form, I worked three full repeats of the chart, and then rnds 1-10.  Instead of binding off, I divided the stitches in half, turned the pillow inside-out, and did a quick little three-needle bind-off.  After I block out the piece, I'll just have to seam the bottom end - nice and simple!

I'm fairly certain that, since I didn't make the full-size pillow, I have enough yarn left over to make a twin.  I have to say, it was such fast knit, I'm fairly certain I will knit this pattern again - if not for me, then perhaps to give as a gift!
Posted by Handmade by Stefanie at 11:12 AM No comments: 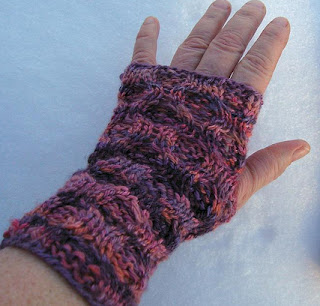 I recently came across this project by flamingneedles on Ravelry - what a great use of leftover handspun!  It's always fun to see what colors, yarns and fibers people choose to knit my patterns - there are often some creative choices I wouldn't have dreamed up on my own.  This is a great example of that - I never once thought I should try using some of my leftover handspun to knit up a pair of these wristwarmers.  Now I'm having to resist the urge to cast on!

Yarn/Fiber: Merino/Tencel blend from River's Edge Fibers in Michigan - spun to approx. DK-weight
Posted by Handmade by Stefanie at 8:57 AM No comments:

Denizen of the Couch 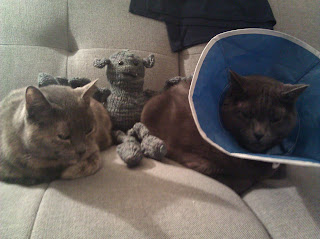 It's all about strength in numbers - and I'm happy to report that cats and monsters can, in fact, be friends.

Dani, the denizen of the couch, enjoys hanging out with Robin and Tilly.  She's a very snuggly monster.


As you can see, she's made herself right at home.

I should probably mention why Robin is sporting his stylish blue Elizabethan collar.  He's been having some mysterious skin issues of late which have made his ears and face particularly dry and irritated.  After yet another visit to the vet and several super-fun (and expensive!) tests, we have determined that it is either an allergic reaction to a flea bite, or some sort of infection.  Our little trooper gets to take an antibiotic and some antihistimines in addition to his daily dose of famotidine (also known as Pepcid AC).  To help his skin heal, we're adding fish oil to his wet food in the morning (just when I thought it couldn't get stinkier).  Since he wouldn't quit scratching his face, we had to pick up a collar last Friday night - good thing we live near a 24-hour vet clinic!  Through it all, he's been a trooper and is still a happy cat. He loves the gentle face and ear massages I've been giving him. The love he rewards us with makes it all worthwhile.

Posted by Handmade by Stefanie at 1:09 PM No comments:

Ever since Book 3 came out, I've been wanting to make an inverse version of my Kitchy Pleated Bag - and at last I've crossed that off my knitting to-do list.

The actual knitting part of the project only took a day and a half - so if you're looking for a fast project for a certain upcoming event next month, perhaps you might want to give this one a try! 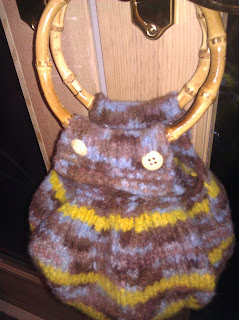 Pattern:  Kitchy Pleated Bag by yours truly - available only in Malabrigo Book 3

Other notes:  If you choose to use a darker color (such as Charrua) as the MC on this bag, don't forget that darker-colored yarns felt more (and faster!) than lighter-colored yarns.  I actually did forget that little nugget of information, and when I pulled it out from the completed wash cycle, was surprised at how much more this version had felted!  (Also, you should check on it from time to time as it's undergoing the felting process - that was tactical error #2 for me, leaving it to its own devices)
Posted by Handmade by Stefanie at 8:43 AM No comments:

Now that we have a comfy new couch, it's time to accessorize....which of course means knitting some enormous monsters to stand (or sit) guard!

This yarn is one of the first purchases I made when I started working at Lorna's Laces - a few skeins of Revelation that had attempted to be Aslan, gone horribly awry - but once dipped in some Carol Green, an unfortunate turn of events was magically transformed into some awesomely variegated yarn...which is how a lot of my "one-of-a-kind" stash was born.

What should I name this big squishy bugaboo?!?
Posted by Handmade by Stefanie at 4:22 PM No comments:

It's been a pretty weird week in Chicago - I can't think of any time I've witnessed such snowy madness (unless you count any time it snowed in Portland, where even an inch could shut the entire city down).  Luckily I have plenty of yarn on hand in the event of a snowpocalypse, and our new couch was delivered the day before.  That's pretty lucky!  Just this week alone, I think we've gotten our money's worth as we've clocked some serious couch-breaking-in hours.

I had a lot of non-knitting to-do's to acccomplish earlier in the week, but I did manage to finish a new work hat for Tyler - his only cotton hat for work has seen better days.  This was a nice fast-knitting little hat, and it fits him perfectly!


On Wednesday I finished the Stephen West shawl from Malabrigo Book 3, but haven't had time to block it as of presstime.  It turned out pretty well, despite the previously-mentioned issues, so I'm looking forward to getting it ready to wear (and posted on here!)


I also came across a link to my whale chart on this cute little blog.  It's always funny to me, the things that people latch on to - to illustrate the point, my mustachio nosewarmer is still the most favorited design on my Ravelry page.  It was something that I made on a lark after joking about it at work one day...I never imagined anyone would like it, much less want to make one for themselves, but it's nice to know that others are in on the joke nonetheless.

I've also been meaning to post these photos of the never-ending sport-weight sweater - the end is near, my friends!  The sleeves have been joined to the body and just tonight, I began the pattern on the yoke.  If I'm lucky, perhaps this sweater will be done by the end of the month!  I probably just jinxed myself, but sometimes you have to dream big, right?

Posted by Handmade by Stefanie at 11:34 PM No comments: