Decluttering my office and craft room is an ongoing quest of mine. Earlier in the year, my focus was destashing yarn (both handspun and otherwise) to avoid overwhelming SABLE anxiety. Many skeins have found lovely forever homes already, although there are still some good things up for grabs on my Ravelry destash page and also in my Etsy shop if you are so inclined.

Once the Great Yarn Destash of 2018 was under way, I turned my attention to all of the finished items I never wear of use. I have piles and piles of them - it's madness! So I set up a shop on a new Etsy competitor site called Aftcra where I could host my first-ever sample sale.
Everyone on my newsletter list got first pick, but there's still plenty of good things up for grabs. There are hats, scarves, fingerless gloves, cowls, toys, bags and more, and everything is basically priced at the cost of the yarn so you really can't find a better deal. Also, everything ships FREE to US addresses! 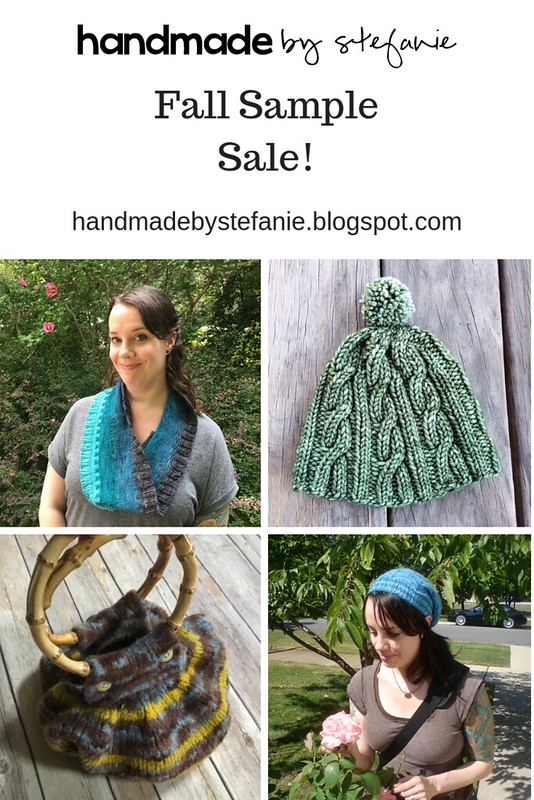 What I'm Working On

The last two weeks have been a little crazy, and I'm glad to get back to my regular Wednesday posting schedule. Since it's been a while since I've shared any WIPs on this blog, I thought I would share everything I'm working on now that all of the secret knitting projects for designs in progress have been published (I blogged about the 3 newest designs here if you missed it).

To kick off September, I started a Weekender Sweater for this knit-along using Prairie Spun DK from Brown Sheep. And because I like to live dangerously, I used my shiny new Ginger interchangeables from Knitter's Pride (which arrived just in time for the KAL start date) instead of the needles I swatched with. Considering the sweater is to be work with plenty of ease, I'm willing to take the risk. So far, it's looking great and is the perfect, soothing knit. 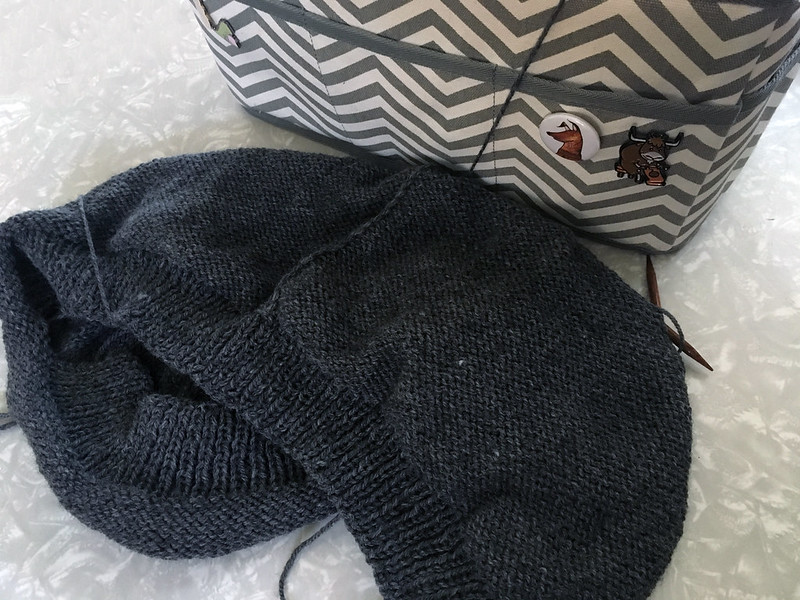 Also in the same roomy knitting basket is another project using Brown Sheep yarn! I'm knitting the Color Block Cowl pattern, which is available for free on the Purl Soho blog, and I'm using 3 skeins of their new superwash yarn Stratosphere, which they sent me for review. So far I am loving the yarn, but I'm not completely enamored with the pattern I chose, so it's been slow going. I do think the end result will be worth it, however, so I have decided to press on! 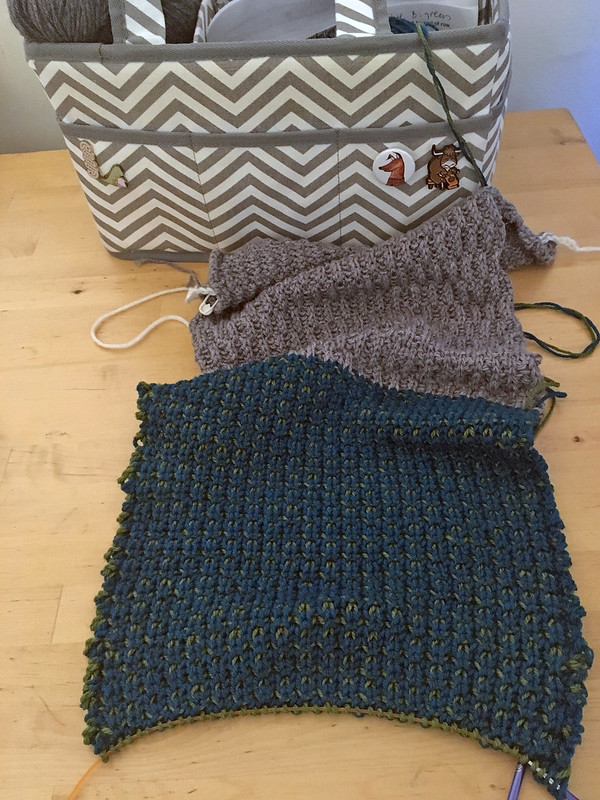 I'm still working on my second So Faded sweater. It's become my on-the-go knitting project, which means it doesn't see very much action because I really haven't been going out too much. I am closing in on the body, though it feels like I'll never get to where I add the fourth color. ..the closer I get, the further away it feels! 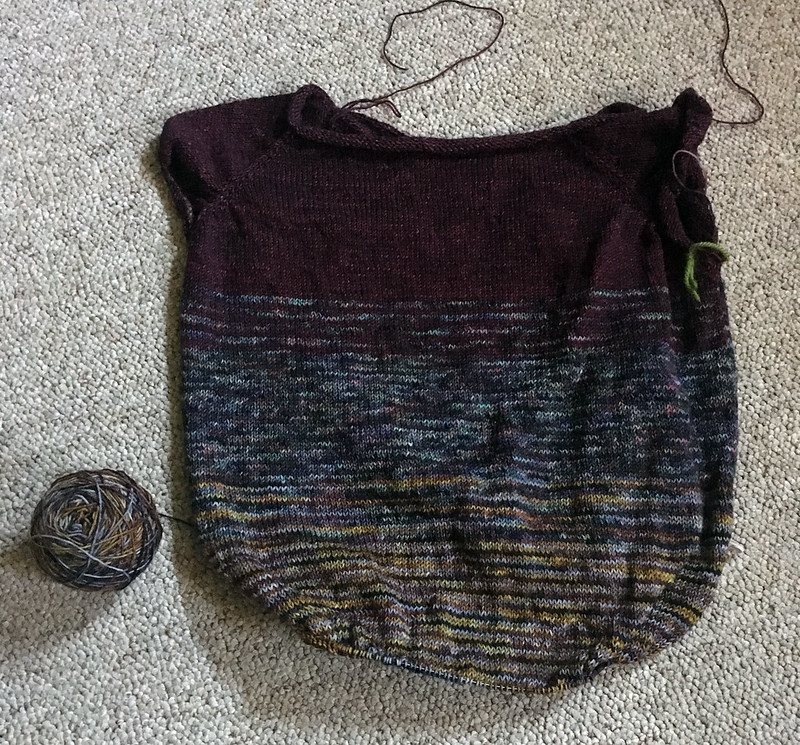 Would you believe that I have never worked from a sock blank before? It's true. I've always been intrigued by sock blanks, but it wasn't until recently that I got the opportunity to give one a try from Zen Yarn Garden. There are several options for how to work from one, but I decided to just go for it and am knitting straight from the blank. I thought it might make for a lumpy bumpy project since the yarn looks an awful lot like ramen noodles, but the yarn is so soft that it's knitting up beautifully. You would never know that I didn't first wind it off and/or wash the yarn first! I'm knitting this shawl pattern which you can get for free when signing up for the Zen Yarn Garden newsletter. 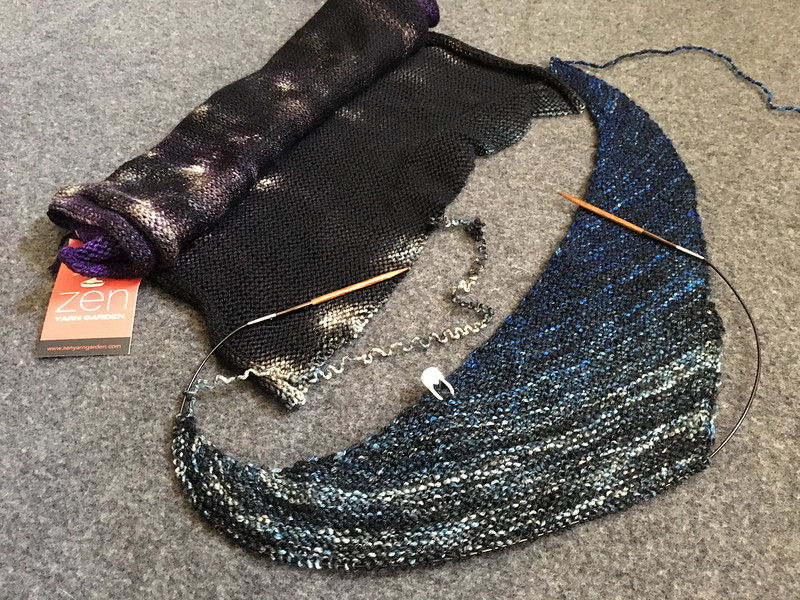 I also joined the Scintillation Tiny Star KAL, which  is happening here on Ravelry. Even though I already have plenty of projects on the needles, I thought it would be a fun way to use up some leftover bits and bobs of yarn while also test driving my new Ginger DPNs (more on this nifty needle set later....I think they may be my new favorite DPNs!). If you've never knit a Hunter Hammersen pattern, this would be a great introduction I think - she is so thorough and makes sure to really explain things, while still leaving things open-ended so that you have a lot of options for customizing your project. For example, the Scintillation pattern is 18 pages long! It includes lots of tips and photos to help you knit the project, all I had to do to supplement was refresh my memory on the Figure 8 cast on. Since the pattern was so long, I decided to just print the page that had the charts for the cast on number I was planning to make, and then kept it loaded on my iPad to refer to any other instructions as I knit. So far that seems to be working pretty well. I finished knitting one side of the star and just need to move the held stitches (that you can't see in the photo below, but they are on the orange cord) over to DPNs to knit the second side of the star: 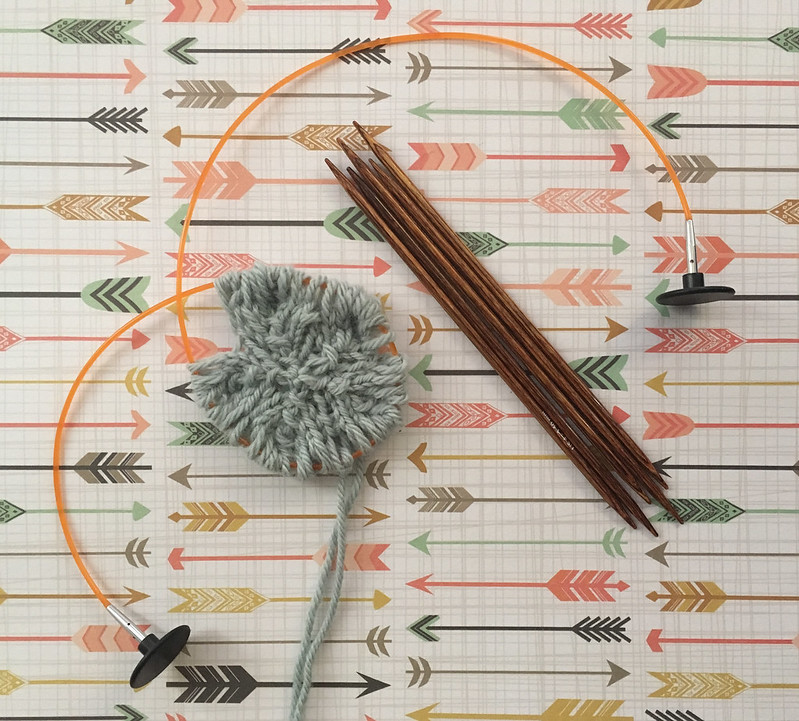 Also, I haven't blogged much about my newfound interest in cross stitch, but if you follow me on Pinterest or Instagram you may notice that I am posting more things about this craft! Right now I am working on my biggest/most ambitious project to date using this pattern from The Witchy Stitcher on Etsy. As you can see, I'm going a bit off book and adding in some other colors; in addition to purple and black I plan on using grey and perhaps some sparkly or glow-in-the-dark floss. Over the weekend, I had to rip out almost all of the purple flower because I had made several mistakes. Man, ripping out cross stitch is way more annoying that ripping out a knitting project, if anyone was wondering. I was glad that I finally found where my seam ripper was hiding to speed things up a bit. 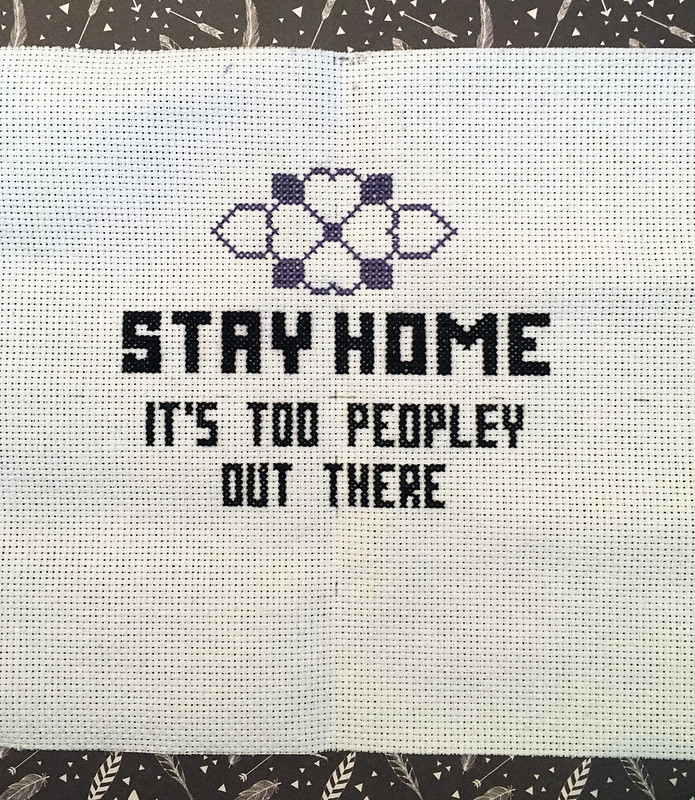 I think this might be the most WIPs I've had in progress in quite a long while, and that doesn't even count the two sock projects I have in hibernation. Next week, I plan to share a tutorial on fixing mistakes in your knitting, so I hope you'll come back to check it out!
Posted by Handmade by Stefanie at 8:00 AM No comments:

I am always on the hunt for ways to use up those mini skeins of yarn that I can never resist - so it's no wonder that my latest designs were inspired by (and created especially for) minis! The nice thing about patterns which use mini skeins of yarn is that the frequent color switches keep me from getting bored while knitting, plus it's a great way to use up leftover bits of yarn if you don't have any mini skeins on hand! After finding a lovely skein of navy blue yarn I'd dyed by hand last fall, I was inspired to pair it with some bright sock yarn colors to create the Mini Brights Slouchy Hat. 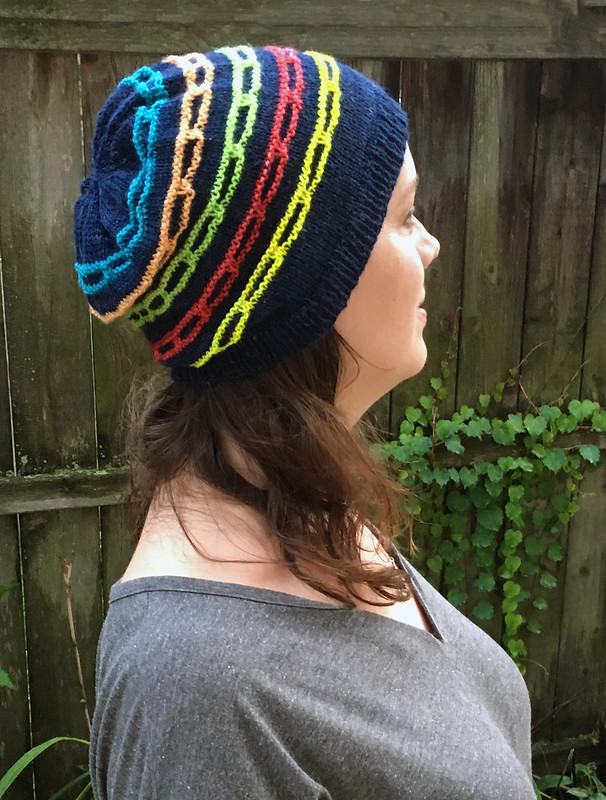 As luck would have it, I was recently asked to create 2 new design for the new sport weight Lhasa Wilderness mini skein sets from Bijou Basin Ranch. Each set features 4 hand-dyed colorways that coordinate with one another, making it fun to mix and match however you like. 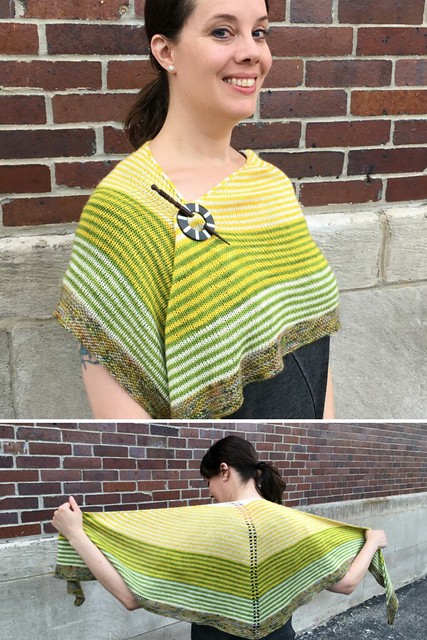 The Danke Striped Shawl uses 2 sets to create a fun, easy-to-knit striped shawl pattern that is big enough to wrap around your shoulders. The instructions include how to knit the striping sequence shown here, but you can also create your own striping sequence to knit this full-size triangular shawl! 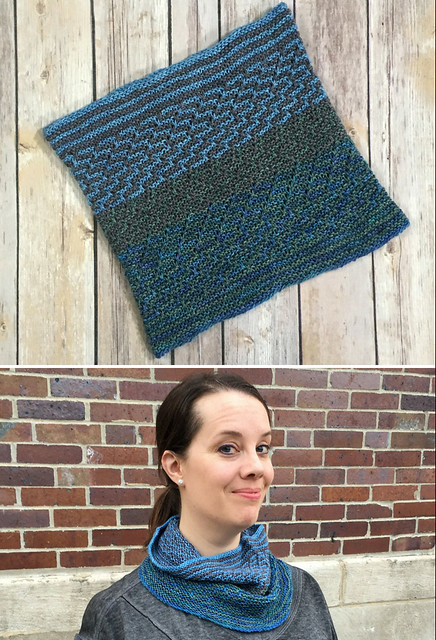 The Mahalo Mosaic Cowl may look like complicated colorwork, but the magic is in the slipped stitches! If you can knit stripes, you can create this squishy, wearable accessory. You could also try knitting it with just two full-size skeins of Lhasa Wilderness if you'd rather! 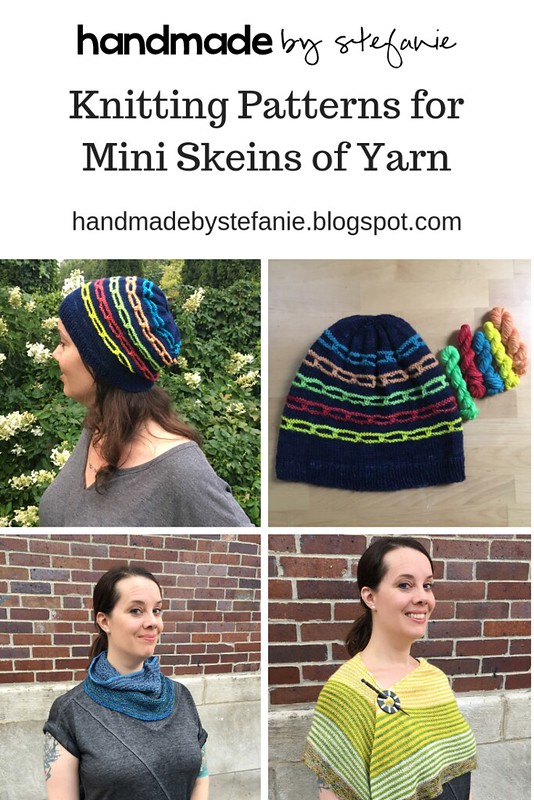