Running out of yarn is something that every knitter (or crocheter or weaver!) dreads, and when you're working with hand-dyed yarn, it can be particularly anxiety-producing.  The natural variations between dye lots means that it's not as simple as finding another skein to use if you run out of yarn before you're done. While those variations might not be noticeable when you're eyeballing the skein, they can be clear as day once you've used that yarn to your project. For this very reason I highly recommend getting an extra "safety" skein when you are buying hand-dyed yarn for a large project. 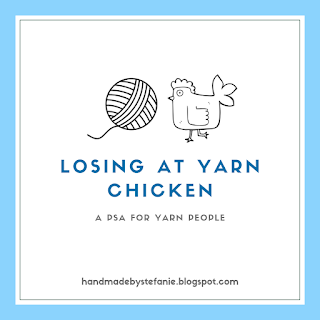 
I've successfully made tons of project via stashdiving* and never run out of yarn until this point. I suppose it was only a matter of time, but I was absolutely crushed when I ran out of my contrasting color of yarn while knitting the Cheri Chevron Shawl by Ambah O'Brien.

What on earth happened?! I was definitely gambling with my yarn choices: while the main color (MC), a variegated skein of Leading Men Fiber Arts Show Stealer in How You Doin (LOL), was a completely full skein, the contrasting skein (CC) of Ancient Arts Socknado in what I thought was Great Scott! (more on that in a sec) was not. I'd used a few yards here and there for some projects, including the Mini Brights Slouchy Hat. I'd probably siphoned off about 20-30 yards, but I weighed the skein and compared it to yarn weight listed in the pattern and that is probably where I got into trouble; I'm pretty sure that both yarns I used were a little heavier than the single ply fingering used in the pattern. Oops.

I figured I could just keep weighing the skein as I worked and things would be ok, but once I reached the halfway point I knew it would be a stretch. It didn't help that I kept accidentally cutting this yarn before I was done working the CC section, in effect wasting already precious yardage. Needless to say, the yarn chicken caught up to me!

At this point, I'd come so far that only two options seemed viable: buy another skein of the contrasting color, or finish the shawl with the MC. My gut (and several wise people on Instagram) told me that the second option was probably best, but the perfectionist in me was being fairly stubborn and I ended up buying another skein of CC and patiently waited for it to be dyed and shipped to me from Canada.

When it finally arrived, I was so excited....until I held it up to the shawl and saw that it absolutely did not match, and it was then that I realized that I'd remembered the name of the color wrong. This was NOT a difference in dye lot, this was just me falling victim to my own crappy record-keeping skills. Over the last several months the yarn label had disappeared and somewhere along the way I'd arbitrarily decided that Great Scott! was the name of the color based on the photos on the yarn dyers website. Obviously that's not the best way to go about that...
Not only did I have a new skein to add to my stash, thus negating the positive effects of a 100% destash project, I was also faced with a project that had been in timeout for several weeks that now had to be finished somehow. I'm so glad that I was using the knitCompanion app to keep track of this, because I'm sure in that time a paper pattern would have disappeared and I would have been even more frustrated with myself than I already was!


Plan B went into effect, and I used the MC to finish the shawl. My inner perfectionist is just gonna have to get over it. And if all of this pain and suffering means that I remember these lessons for the next destash project, then I suppose it was all worth it!

Of course, now I have to weave in allllll of those ends....


Have you ever majorly lost at yarn chicken? What did you do?


*most of which are fade-related!
Posted by Handmade by Stefanie at 8:00 AM