On Sunday, November 10 we said goodbye to one of our cats, Tilly. She was 17 years old and from the same litter as our other cat, Robin. We got them when we were living in Portland, OR, and they've been through a lot ever since then, moving from Portland to Kansas City for a brief stop before moving to Chicago 14 years ago. 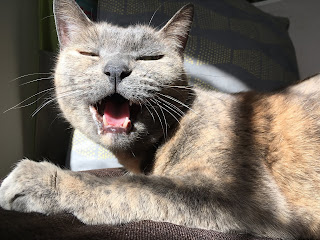 If you follow me on Instagram, you were frequently treated to Tilly's antics - she was always in the thick of things, and had the energy of a kitten until fairly recently, when old age must have finally caught up. Ironically, she was shy around strangers and would almost always hide when people came over to our house. Working from home, I appreciated having another critter to talk to throughout the day (she was VERY talkative!). 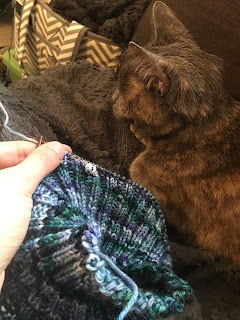 We had a Saturday morning ritual: she would snuggle in the spot between me and the arm of the couch, and I would knit, drink tea, watch anime, and pet her every now and again as we both eased into the day. Tilly was my chief yarn and fiber inspector, and she was always nearby to supervise, no matter what I happened to be doing. Consequently I have a ton of photos of her with fiber, yarn and WIPs. I can't think of a better way to honor the memory of one of my best furry friends than sharing some of the highlights from her many years of service as the resident yarn (and fiber) inspector.


Posted by Handmade by Stefanie at 8:00 AM No comments:

Since my last post about WIPs/FOs back in September, I've finished a surprising amount of projects (at least, for me - I'm a really slow knitter!). I know it's not a Wednesday when I would usually share a blog post, but I just couldn't wait any longer to show off these finished projects! 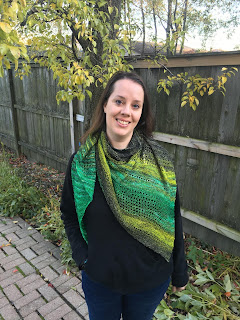 Purl Thief Shawl by Kalurah Hudson
This is my freshest FO, and it's been a bit of a slow burner: I started this shawl on the Amtrak train down to Kansas City at the end of August, and it's been my "on the go" project ever since. Considering I don't leave the house a whole lot, that means I've bene working on it off and on ever since casting on, so finishing it is a huge win! The yarn is a gradient yarn cake from Zen Yarn Garden that I picked up at Stitches Midwest earlier this year, and I basically just knit the pattern repeats til I ran out of yarn! It's a really simple pattern, but I still managed to mess it up time and time again, necessitating a bit of frogging (for me, it seems like the simplest patterns are really the hardest sometimes). Overall, it was a soothing project and I'm happy with how it turned out. 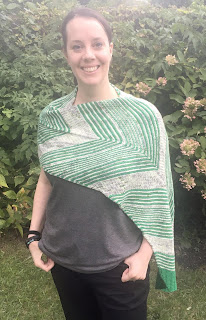 Wraptitude Shawl by Megan Williams
Here's another slow-burning shawl knit with green yarn....I started this project at the beginning of June but didn't finish it til the middle of September for a variety of reasons - first and foremost, I lost at yarn chicken, and had to order another skein from Knit Circus before I could finish. Secondly, it quickly became a stay-at-home project, so it didn't get worked on as much as other projects I had on the needles. The "styling loop" intrigues me and I find that the easiest way to use it if slipping one arm through the loop to secure one end of the shawl, and then wrapping the other end around my shoulders as you can see in the photo above. I'm not sure that I would knit another shawl with this styling feature, but it's an interesting concept and I'm glad I gave it a try. 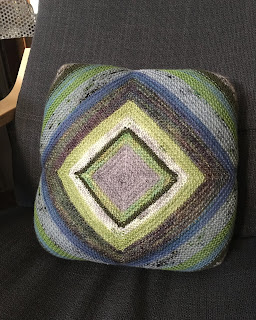 Scrappy Pillow for the Scrappy Pillow Make-Along
This was a fun way to use up leftover bits of sock yarn, including some of the minis that I also sell here on Etsy. Our couch is in danger of being overrun with handknit/crocheted/woven pillows, so this one may ultimately find a new home. There is also a crocheted version included in the same pattern that I'll have to make at some point! 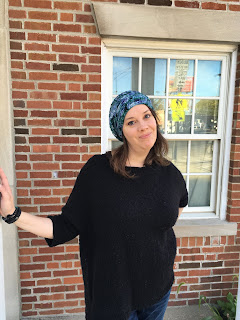 Triangle Puff Hat by Cynthia Shavers in Miss Babs Yowza
Look, something that isn't green!! I test crocheted this hat and it was my first time using Yowza. The yarn is fabulous, and even stood up to repeated frogging. I loved how the colorway worked up, and the stitch pattern was easy to master & memorize. There is also a matching cowl for those who dare, and you can make the set with just 1 skein because Yowza (as the name would imply) has a  lot of yardage. 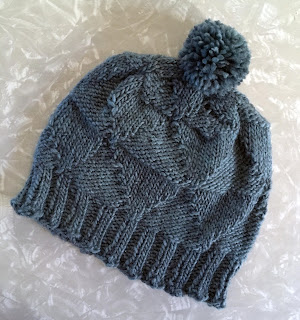 July Hat by Courtney Kelley
I needed a travel project and wanted to destash some Brown Sheep Lamb's Pride that was lurking in my stash, and I love all of the free patterns that Kelbourne Woolens has been releasing as part of their ongoing Year of Hats series. I'm planning to donate this somewhere, either to an organization like Wool Aid or someplace that is collecting warm items for refugees coming to the US who aren't used to super-cold winters. Or, I might keep it for next year's #hatnothate campaign, since they just announced they'll be doing it again.... 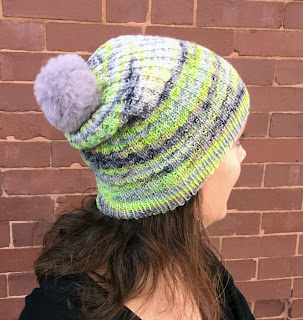 Thermal Hat by Me
This is the yarn (and faux fur rabbit pom) I bought from Yarn Social when I was in Kansas City for my grandfather's funeral. I couldn't find a pattern that spoke to me, so I just grabbed a stitch dictionary and chose something that I thought would work with the variegated yarn, a simple thermal stitch. I still have about a half a skein left, so I might find a darker contrast yarn to knit a two-color hat that might look better on my head - as much as I love how this turned out, I truly can't wear anything with yellow (especially of the highlighter variety) so close to my face. Oops!
Posted by Handmade by Stefanie at 8:00 AM No comments: