The Only Handmade Gift I Made for Christmas

When I first started knitting, I made everyone in my family scarves for Christmas one year - that would be between 10-12 scarves by my count. Each one had a different stitch pattern, some of which were beyond my skill level at the time, but somehow I got them done in time. I definitely sweated it, but managed to meet the deadline with minimal drama, if memory serves.

Over the years, I have knit a lot of gifts for people, but the numbers have been steadily declining for a number of reasons. First and foremost, it's stressful to do! Besides worrying about making the deadline, you also have to worry about it fitting, or being something that they'll end up liking/using. I've found that my idea of what people will like and enjoy can differ from reality, so I've taken to offering up a bin of finished handknits and letting folks take what they want. Their selections almost always surprise me.

So, fast forward to this year. I wasn't planning to make any gifts, but then The Madalorian came out, introducing an adorable character that looks like a baby Yoda. Naturally, several knit and crochet patterns to make The Child followed suit, and I couldn't resist this one for a Baby Yoda-inspired ornament to put in Tyler's stocking. It turned out a little bigger than I was imagining (and I even used worsted weight yarn instead of the bulky weight the pattern calls for), but it turned out well and was simple enough to whip up in a few afternoons while Tyler was away at work. 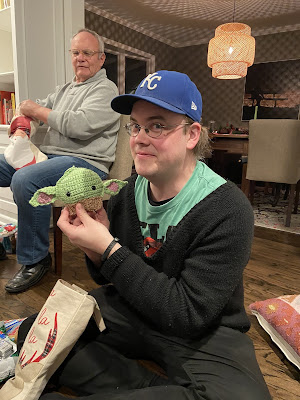 He loved it - it even might have been his favorite gift this year!
Posted by Handmade by Stefanie at 8:00 AM