Faster than the speed of blog

Things are happening faster than I can craft blog posts for them!  Since I'm going to TNNA this week (which I imagine will be a few blog posts unto themselves!), I will have to fill you in on the bullet points:

1.  Mustachio May:  I made a total of 5 nosewarmers from a single ball of Knit Picks Comfy Sport - and I still have yarn left over!  I'm guessing I'll be able to make two or three more.  I did create two new mustachio options, which I'll be including on a more official PDF version of the pattern, to be typed up whenever next I get a chance - hopefully sooner than later... 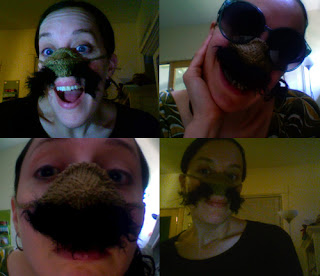 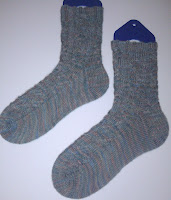 2.  Last week I finished a project that's been on the needles since JANUARY 15 (sorry for the all-caps, but that is just madness) - the languishing Stalagmite Socks (by Cookie A) are at last languishing no more.   It's a great pattern, and though the cable pattern is a little daunting when you look at it, it's not too difficult once you get into it.  However, it does happen to be a pay-attention project and therefore isn't suitable for working on outside of home - and as previously mentioned in several blog entries, my at-home knitting time has been drastically reduced of late.  It's still pretty ridiculous that I spent four and half months knitting these, but I'd say it was worth it! 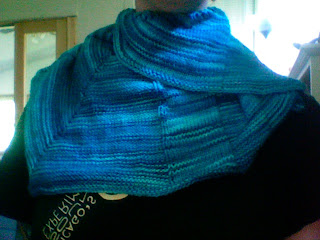 3.  Figure this - I spend nearly half a year knitting a pair of socks, but bust out the Pogona Shawl by Stephen West in a week! I have no real explanation, except that this pattern was extremely addictive - it was easy to memorize (I used color-coded stitch markers to help me keep track of my increases) but still interesting to knit.  I started this project a few days before I had to fly to Louisville, KY for a wedding, and it ended up being the perfect flying companion.  I made some major progress whilst in Kentucky, mostly due to the fact that everything I wanted to do (check out yarn stores, visit the craft museum) was closed the entire time we were in town (which was a sum total of two days - Sunday and Memorial Day).  I got so into the pattern, I forgot to start the garter edging when I was supposed to - I ended up omitting the last two rows of garter for fear I'd run out of yarn on my bind off.  Unfortunately, I did run out of yarn with only 40 stitches left to bind off!   However, I was able to find some similar-colored sock yarn in my stash to fudge the remaining stitches.  I have to look good and hard to find the place where I ran out of yarn.

4.  I got a great deal on some Malabrigo Rasta for the first project in the Summer of Toys KAL - our favorite trouble-maker Mr. Nubbins is about to have some new friends (compatriots?).  Lady Nubbins, as I've dubbed this one I'm knitting out of Oxido, would have been finished in a day if I hadn't gotten sleepy - I knit the legs and body in under two hours.  Gotta love big yarn!
Posted by Handmade by Stefanie at 9:07 AM