Earlier this month, I flew to Phoenix for a new-to-me trade show called Creativation. It's similar to the TNNA trade shows I've attended in years past in that it's specific to the crafts industry, but the similarities pretty much stop there. Creativation is much wider in its scope to include painting, beading, paper craft, edible arts, as well as yarn craft (and I think I saw some felt/fiber craft for good measure, too!). For me, it was heaven, because I've done pretty much every craft at some point in my life, and it was interesting to see how they have evolved since then.

The show floor is massive (enough to have its own bus route!!), and many of the booths were quite elaborate. It reminded me a lot of H+H Cologne in that regard, along with the cool gathering places and lounges throughout the show floor.

What struck me most was the amount of cross-pollination I saw - a knitted cake, cute alpaca and llama displays, and pom poms everywhere.


Most of the yarn brands at the show were those you would see at a big-box craft retailer - Lion Brand, Red Heart, etc. - but there were some exhibitors such as Hoooked (who make recycled cotton and t-shirt yarns) and Zen Yarn Garden (a hand dyer you are probably quite familiar with!) who represented the indie niche of the yarn world.

My company, Stitchcraft Marketing, had a booth where I was dispensing advice all weekend long:

I did manage to escape from time to time to explore the show floor to take in all of the interesting eye candy. I think a lot of knitters and crocheters are starting to explore other crafts (myself included) and I think it's something that the yarn industry should probably embrace, as one type of creativity fuels another, and yarn lovers have that DIY spirit - they just enjoy making stuff, and it's more fun to find a Pinterest tutorial than to head to the store and buy a new vase.

Plus, the craft supplies available now are SO much cooler than I remember them being! There are a ton of inks, paints, and varnishes that do the most amazing things (and I believe that I saw mess-free glitter in the Plaid Craft booth, if that's something you're into).

I also discovered a very cool product called The Holster that I doubt I would have found at any of the other craft shows I attend - it's a silicone container that you can attach anywhere, and I have a feeling I'll be buying a ton in the future because I love the sample I was given at the show (it's holding my scrub brush in the kitchen sink). 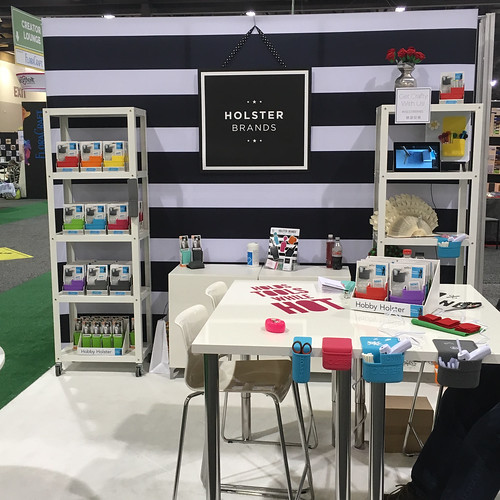 Make-and-takes, small projects you can do in a booth and then take home with you, are very popular at Creativation. My favorite day was on Sunday, when I happened upon the Llama party in the Fuji Film booth, which a coworker had spotted on Instagram prior to the show and alerted me to. Now my cute little llama is sitting on my desk and I just love him!

No matter what show I go to, apparently stuff is going to come home with me. I was trying really hard NOT to bring anything home, but there were several very nice people who insisted on gifting me samples and I just couldn't say no. I'm excited to try out the t-shirt yarn (most likely in some weaving projects!), and the washi tapes are already in use. I'll be saving the printed duct tape for shipping Christmas presents this year (so much more festive than regular packing tape!!) and as previously noted, the Holster is already in use. I may even dust off my apron and try my hand at some fancy cupcakes with the fondant sample from Satin Ice. 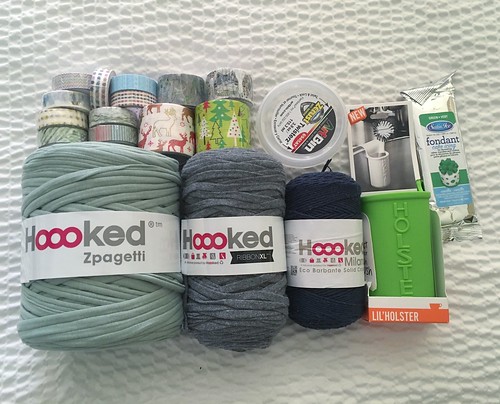 I would love to return to this show, it was super fun and very inspiring. Although Creativation is closed to the public, they did announce a new show for this fall that anyone can attend called In The MKNG. If you live in the northeast, it might be worth checking out!
Posted by Handmade by Stefanie at 8:00 AM