These socks have actually been done for a while - but I never got around to posting about them!  The yarn is some Trekking XXL I got in a yarn swap, and I used the stitch pattern from Judy Sumner's Kyoto legwarmer design from Knitted Socks East & West (if you're wondering how I adapted it for a fingering-weight yarn, I cast on 70 sts on US #1 needles, then used half of the stitches for the heel flap).  I think they turned out pretty well - the stitch pattern kept me interested in knitting them, but it's not too busy for the patterned yarn.

I made this hat in a couple of days, but still haven't found the time (!) to sew some cute buttons on the band.  I've determined that I need more hats in my winter arsenal, and when the Spring 2012 issue of Knitscene came out, I knew I'd have to make the adorably stripey East Falls Hat.

I'm not typically one to knit the pattern in the specified yarn, much less the colors used in the model.  However, I've been dying to try Acadia from The Fibre Company for quite some time, and there just happened to be a sale at Nina over the weekend.   Since the stars aligned, I figured I should go for it and I picked up two skeins, casting on almost immediately as soon as I got home.  By the end of the next day, I had a (mostly) finished hat! I probably have enough left over to make an inverse version of this hat, too (I used Asparagus (MC) and Blue Heron (CC)). 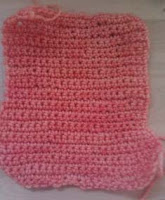 I've seen some people complain about the slubby texture of this yarn on Ravelry, but for me, it's part of its charm.  The merino/alpaca/silk blend is super soft and perfect for striping.

Don't forget - if you click the links above to purchase Acadia online from Doodlebug Yarn, you can get $5 off your order by entering coupon code "HBSblog" - woo hoo!

Finally, I have finished my first crochet swatch.  All told, it's not too shabby - my favorite part is where you can tell everything clicks and I "get it" - i.e. there are no more unintentional decreases!  I used some leftover worsted-weight yarn I had on hand from Squoosh Fiber Arts (a day-glo orange color called Mr. Tangerine Man).  Next up: Double crochet!
Posted by Handmade by Stefanie at 10:11 AM