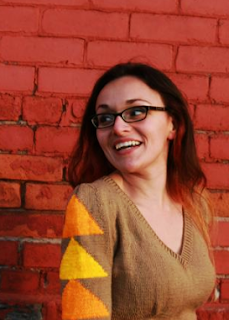 Today I have an extra-special bonus post from Teresa Gregorio, who is working on an exciting new project with Leah Coccari-Swift called Great Northern, a pattern collection inspired by Twin Peaks (more on that in a sec!). Teresa is a talented designer and blogger whom I met at TNNA earlier this year, where we shared our love of craft beer and I got her hooked on Untappd!
Leah and Teresa are raising funds for their project via Kickstarter; as you may or may not already know, I absolutely love supporting cool projects on Kickstarter, especially when they involve knitting (see: Midwestern Knits, Wooly App, etc). They already have my pledge - I hope you'll consider supporting them too!
Without further ado, I'll let Teresa share more about this project along with her list of the Top 5 Knitwear Themes inspired by the show!
Knitters and sweaters. We go together like cherry and pie.Or like Audrey and Dale.  Or Norma and Ed.I’m alluding to Twin Peaks; for those who may not have encountered this 90s television gem before, it was a groundbreaking series that ran for two seasons and is well known for its unusual, eerie atmosphere, bizarre characters, and (for the fashion-watchers) its collection of vintage knitted sweaters.
The wardrobe on the show is one of those things that made the show so groundbreaking; director David Lynch brought a big-screen sensibility to tv, where he created a sense of timelessness and character individuality through wardrobe. There’s the mid-century class of Audrey; the cozy 70s vibes of the Log Lady; and even the oversized pre-grunge of the late 80s/early 90s. The show is filled with fantastic inspiration; so fantastic, in fact, that fellow knitwear designer Leah Coccari-Swift and I have a Kickstarter campaign to fund the publication of a pattern book filled with our own take on the vintage vibes of Twin Peaks. Our book is called Great Northern, and we’re really excited!!
Let me walk you through some of that vintage fabulousness and what we’re doing with it. 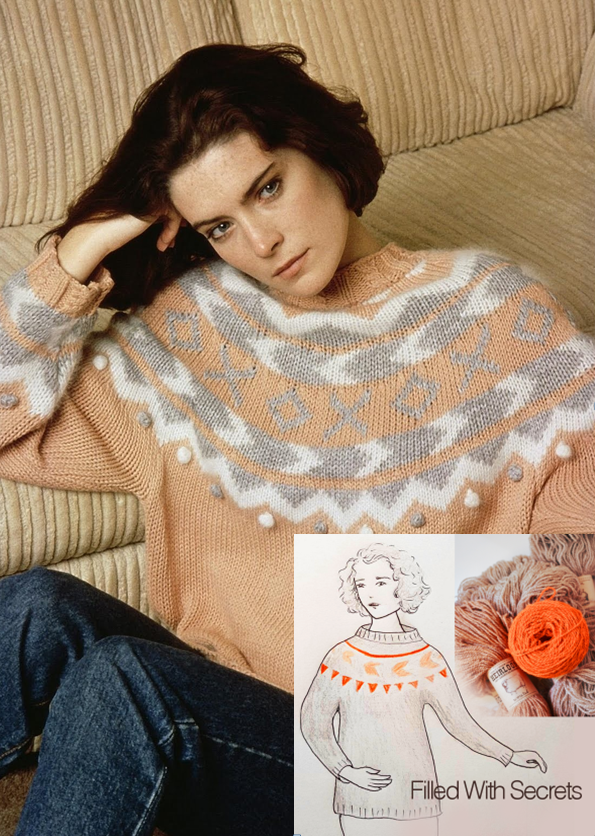 Sweater Type 1: Late 80s oversized ski sweaterTwin Peaks was filmed right at the dawn of the 90s, so it’s no surprise that there’s a great set of late 80s/early 90s fashion sensibilities in the wardrobe. Several character sport sweaters of this kind; here you see Donna (a young Lara Flynn Boyle) in her oversized circular yoke pullover.

Leah has drawn inspiration from this garment type to create Filled With Secrets, one of her coziest sweaters that’ll be part of our book Great Northern. 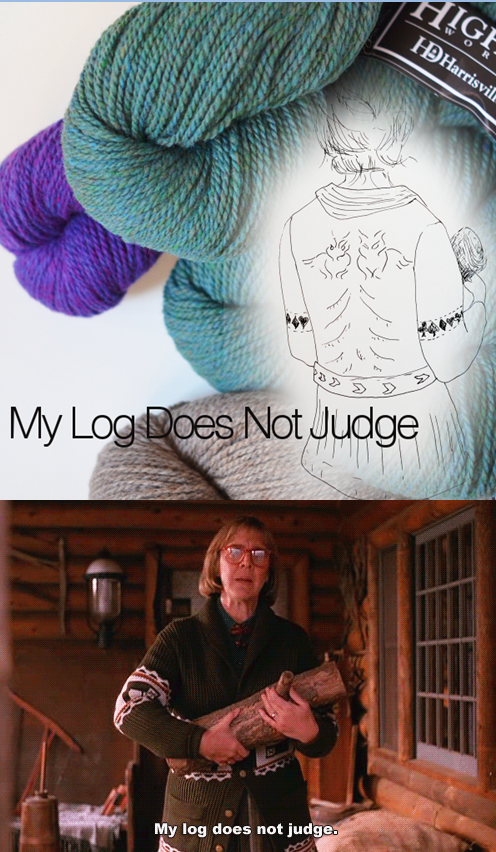 Sweater Type 2: Retro Vibe CowichanEverybody loves a cowichan sweater. They’ve been around for over 100 years now, getting love from each decade and picking up a sense of 20th century timelessness along the way. They’re cardigans/jackets that feature graphic colorwork. The non-sequitur spouting Log Lady, a fan favourite, is often seen wearing one of her many cowichan style jackets.Leah’s taken the spirit of this garment type and added an updated flair with cable work and waist-defining belt in her design, My Log Does Not Judge. 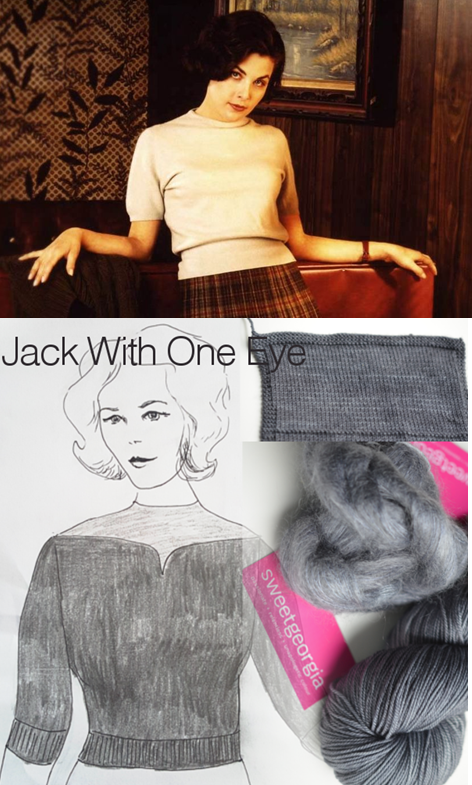 Sweater Type 3: Mid-Century Glamour TopAudrey Horne has got to be the most stylish character on Twin Peaks. She goes from sweet high schooler in saddle shoes to self-directed, powerful seductress over the course of the show. This journey is reflected through her wardrobe. One of her iconic outfits is the fitted, set-in-sleeve sweater and plaid skirt she sports near the beginning of season one.
Leah has drawn inspiration from Audrey for a number of pieces in Great Northern. One is her classy Jack with One Eye, a figure-hugging vintage crop top with attractive yoke detail. 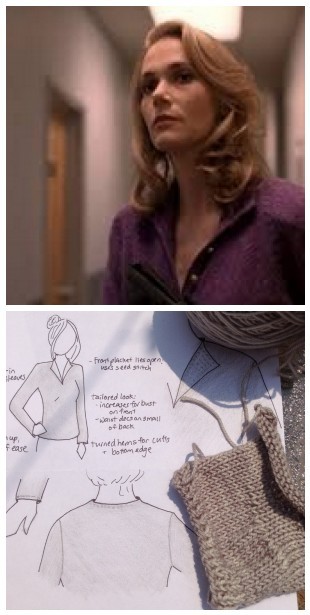 Sweater Type 4: The HenleyA Henley is a classic sweater shape. They started out as menswear many decades ago, and gained wide popularity in the 1970s. They’re essentially collarless polo shirts, with a buttoned placket running beneath the rounded neckline.
One of my favourite characters in Twin Peaks wears a Henley in a season one scene. This sweater is a fantastic representation of vintage inspiration, with delicate lines, set-in-sleeves, and a classic, wearable style.I drew inspiration from this sweater to design my own Henley; slightly updated for a 21st century palette, including a graceful neckline, gentle ease throughout the body, and a tailored look with clean, turned hems. 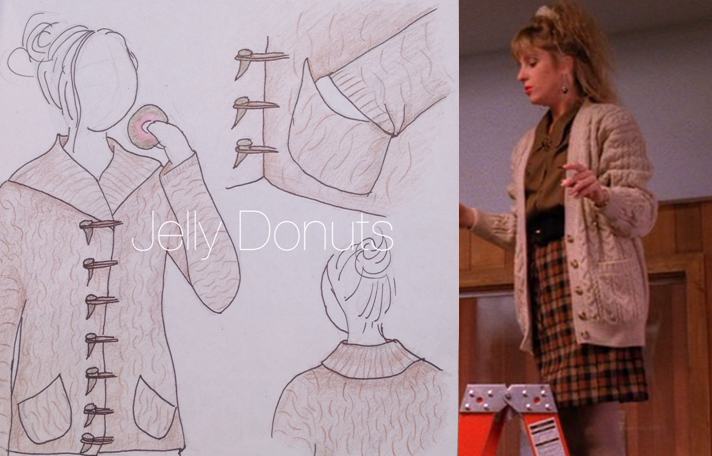 Sweater Type 5: The Drop ShoulderKnitting was super popular in the 1980s. It was THE era of the drop sleeve sweater. And that uber popularity came to pigeonhole that sweater type as exclusive to an earlier age. Fortunately, this is turning around, with loads of drop shoulder designs once again hitting the knitting world. Both Leah and I have drop shoulder sweaters in Great Northern. Mine was inspired by yet another of my favourite characters, the sweet and silly Lucy. The costume designer for the show LOVED to put her in oversized drop shoulder tops; I love this cabled one, and have embraced it and updated it in my design Jelly Donuts, with angled pockets, toggles, and a cozy collar.
Want to help make Great Northern happen? Please consider becoming a backer! There’s loads of fun incentives, and the opportunity to pre-order your own copy and receive free shipping when it’s published in the fall of 2016. Click here to make your pledge!

Popular posts from this blog

What If I Didn't Add Heels?

February 24, 2017
Last weekend, I finished the first sock with my Waterlilies yarn , and just for yuks, I tried it on even though it was basically just a tube sock. Much to my surprise, it fit really well, even without a heel. Who knew? So, that got me thinking: what if I just didn't add the heels?  I never thought a tube sock would actually fit nicely, but I genuinely like the fit, so...why spend time to add the heels? As the saying goes, if it ain't broke, don't fix it.... Let's say I decide not to add heels once the second sock is done - there will still be placeholder yarn for the afterthought heels, as you can see above, so should I leave it in and just weave in the ends? Or should I remove it, put the live stitches back on needles and at least graft them together using more of the Waterlilies yarn? I plan on mulling all of this over as I knit the second sock, and I'd love to hear your opinions of what you think would look best (or if you think this whole "n
3 comments
Read more

A Year of Sock Pals!

September 29, 2021
November 2021 Update: Unfortunately, the next round of sock pals has been postponed indefinitely due to the sudden retirement of the majority owner of Knit 1.  I'm so sad that we won't get to do another session, but it was fun while it lasted! Popping back in to talk about a subject that has always been near and dear to my heart (even if I don't get to do it as often as I like) - sock knitting! I used to knit socks obsessively, and almost exclusively. But as the years went on, issues with my hands (and golfer's elbow?!) severely limited my ability to knit socks without pain. So for a while, I just didn't make them. And it was a bummer!  But then my brilliant friend Allyson, co-owner of Knit 1 Chicago, came up with a brilliant plan: Sock Pals ! Think of it like a pen pal, but with sock knitting. Sock Pals is a combination of a knit-along & sock swap. You get to pick the yarn color and pattern you want to keep for yourself, and then you get matched up with a myste
Post a Comment
Read more

June 12, 2017
It's inevitable that some DIY dyeing experiments don't go as planned - sometimes, the multicolored palette doesn't look as good in real life as it did in your head, or your semisolid color turns out lighter or than intended, or your skein has unfortunate dye spatters or, worse yet, bare spots. Oops! When bad things happen to good yarn, don't fret - you can always overdye your skeins to cover a multitude of dyeing mishaps. You may even get a prettier color in the process, as adding layers of color can add depth that simply can't (easily) be achieved by a single dye session. My crock pot that's dedicated for dye projects! When I dyed yarn at Lorna's Laces, we would frequently overdye mis-dyed skeins of yarn to create one-of-a-kind colorways which almost always ended up coming home from me. In fact, the first time I dyed a multicolored colorway (Mixed Berries), I forgot to add one of the colors to the repeating sequence. Once the dye is set, it'
2 comments
Read more