This scarf has been off the loom for quite some time, but I procrastinated the finishing touches (weaving in the ends, tying off the fringe, and blocking). I used the leftover yarn from a few of my previous weaving projects (one of which is also still in the finishing pile, oops!) to create another fun multicolored scarf. The warp is a gray commercially spun merino yarn, and the weft is mostly handspun, with a little commercially-spun yarn mixed in here and there. 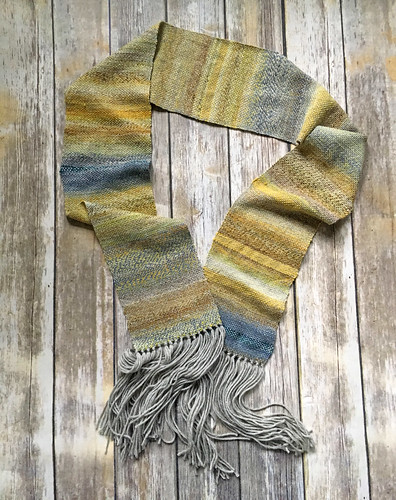 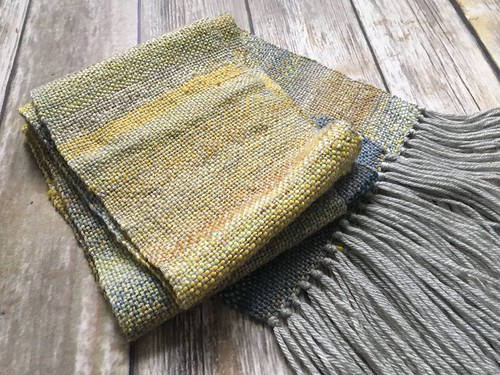 I'm not sure if I will keep this one or not; yellow really isn't my color, but I do like how it turned out!

I also warped for another project over the weekend while my parents were visiting. My dad has been thinking about taking up weaving when he retires, so I thought I would show him the process, step-by-step! 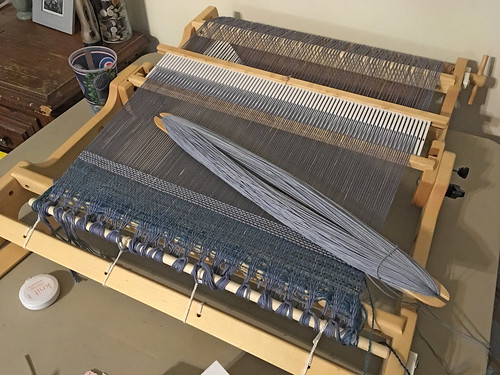 This is my first attempt at a handwoven cotton towel of some sort, and I think I probably should have gone down a heddle size (oops!) - it seems like a towel should be a bit more tightly woven to be effective, right? Then again, a looser weave might be easier at the start, since I have never worked with cotton on the loom before, and it's a lot less flexible and elastic than the wool and wool blends I've been using. I'm also not sure about the shrinkage factor, so perhaps it will all work out in the end (and if it doesn't turn out as planned, I've learned a valuable lesson).

And now that we've all kind of forgotten about Spinzilla, the results have been announced! My team took second place, which I think is pretty darn good. Threepeating is tough! You can check out all of the results here, if you are so inclined.

Email ThisBlogThis!Share to TwitterShare to FacebookShare to Pinterest
Labels: handweaving