this free pattern used to be on a website called the twisted think tank, which is now defunct - but because i want the world to be filled with silly people with fake mustaches and warm noses, i shall re-post this pattern for the good of all mankind.  and just in time for your holiday knitting, too! 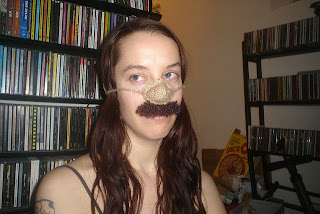 5 sts remain.  cut yarn, use darning needle to pull through remaining sts and weave in ends.

to attach ties, flatten nosewarmer so that it is divided evenly in half.  attach tie at either side of flattened piece so that they will be spaced equally apart.

tack mustache onto nosewarmer with some scrap yarn, or use the detachable method of your choosing!

10.10.11 Edited to add:  This is the basic version of this pattern.  I am currently working on a new version that will be available as a PDF download in my Ravelry shop for a nominal fee - it will have more photos, better instructions, and most importantly....MORE MUSTACHES! I'm working hard to make this totally worth the $3 asking price.  I hope you'll check back for updates and consider purchasing the new and improved pattern as your way of supporting an indie designer!
Posted by Handmade by Stefanie at 10:56 PM