It's been about 5 weeks since the Broad Shoulders Midwestern Knits KAL started, and I am nowhere near where I thought I'd be! My proposed "schedule" which I drafted at the start of the KAL was this: 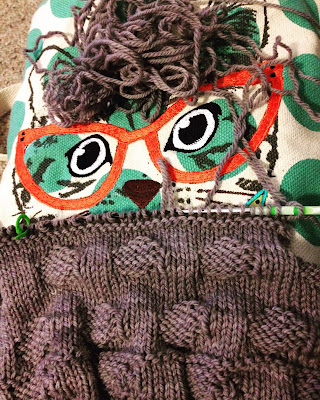 Since the KAL actually ends on December 14, that allows two weeks for catching up...and I am clearly going to need it! By the end of September, I'd barely gotten through the first two stitch patterns. September turned out to be the busiest month ever - both in terms of work and general life stuff. By the time I had a chance to sit down and knit at the end of the day, my brain was fried, and I had a hard time handling anything other than stockinette stitch. In fact, when I did attempt to knit on this sweater, I found I would make stupid mistakes which then had to be ripped out later - through no fault of the pattern, which is actually really fun & easy to knit.

Over the weekend, I did manage to get a lot done on the left front (and I think this photo is a little truer to the yarn color): 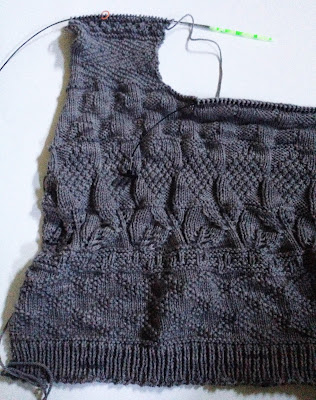 In the mean time, my fellow KAL-ers have been making some excellent progress - and one has already finished their sweater! Raveler CurrentlyPurring gets bonus points for finishing her sweater just in time for Rhinebeck: 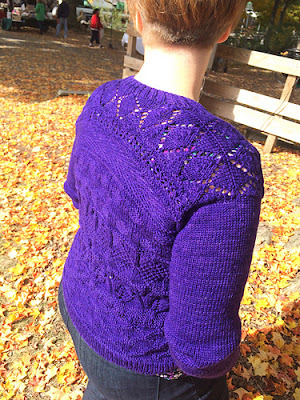 I'm excited to see everyone else's sweaters shape up as we move into the second half of the KAL. If you are a super-speed knitter (or just able to follow directions better than I can), there's still time to join in - there are some great prizes up for grabs!
Posted by Handmade by Stefanie at 8:00 AM